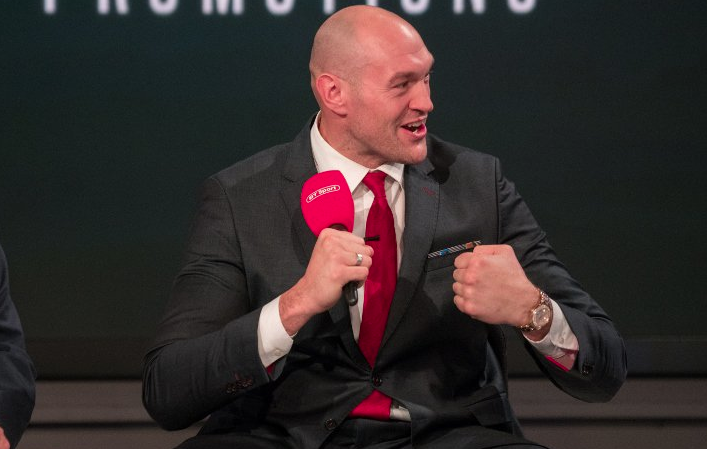 Tyson Fury has reportedly signed a £80m fight deal, this co-promotion ESPN deal is expected to be three fights and will take place primarily in the U.S. Fury’s deal will see him promoted by Top Rank‘s Bob Arum alongside Fury’s current partner Frank Warren.

All boxing fans around the world were in anticipation for a Fury vs. Wilder rematch to be announcement today. This fight deal doesn’t mean that it won’t happen yet but it certainly makes it more difficult with Deontay Wilder signed with Showtime Boxing and Anthony Joshua is scheduled to fight Jarrell Miller with DAZN.

Fury looked happy, healthy and confident as he took the stage during the fight deal press conference, also appearing at the conference was Billy Joe Saunders. Saunders is looking to get in the ring after a year off and compete against Shefat Isufi for a vacant WBO title to prove why he’s the best super-middleweight out there.

“He is one of those who, with what he does, he does very well when the bell goes. He has boxed at light heavyweight and cruiserweight so he is going to be a big, big lump and I need to make sure I am on it and stay away from those big bombs.” Saunders on next opponent Isufi.

Now that the top three heavyweight boxers on the planet signed with different promotions, who can we expect Fury to fight next? Many will be disappointed over the move, as boxing politics have always been detrimental to the sport. However we believe this massive exposure of Fury will make him an even bigger star, just imagine a year from now the hype if Fury vs. Wilder 2 or Joshua is announced.

0 comments on “The Gypsy King Comes to America: Tyson Fury’s Next Opponent Odds”