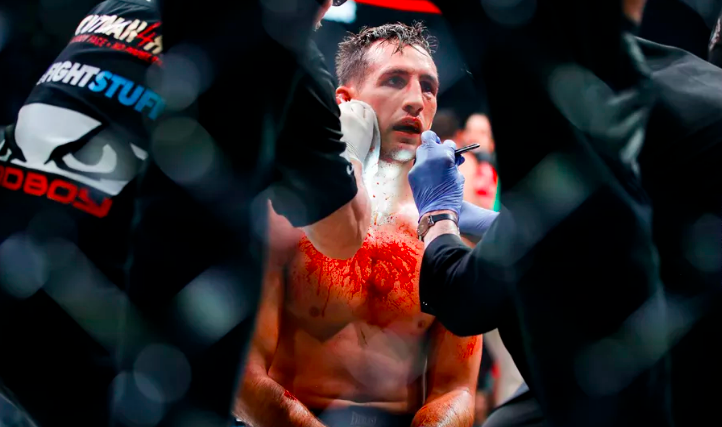 On April 27th, Rory McDonald will defend his welterweight title at Bellator against veteran Jon Fitch. This fight is part of a welterweight grand-prix tournament, with the winner facing Neiman Gracie in the next stage.

MacDonald (20-5) began his Bellator career with a submission win over Paul Daley, then defeating Douglas Lima to capture the welterweight championship. He then decied to test himself and jump up a weight class to challenge Gegard Mousasi for the middleweight title, which he fell short and got stopped by Mousasi in the second round. It was clear that MacDonald’s heart wasn’t in this fight but has found motivation from the loss.

Fitch (37-7-1), has been on the MMA circuit since 2002 from fighting in the UFC to WSOF and now Bellator. Fitch is former WSOF welterweight champion and is a NCAA division 1 wrestler with a black belt in Jiu Jitsu also. Fitch is on a four win fight streak, most recently coming off a decision win over UK brawler Paul Daley.

MacDonald now 29, has been through some wars in the UFC, the Robbie Lawler fight always comes to mind – it’s real when they say fighters leave a piece of themselves in the cage after a brutal fight. However for MacDonald it seems more the mental side that doesn’t show-up sometimes, we believe his hunger will be back against Jon Fitch. This fight will be closer than the oddsmakers suggest, Fitch hasn’t lost since 2014 and has never had the knockout power. MacDonald represents the more well-rounded fighter here, expect Fitch’s plan to grind out a decision win to work against him and MacDonald to get the decision, or pull off a late submission to secure his spot against Neiman Gracie.

The oddsmakers at SportsBetting.ag are giving Fitch a 27.4% chance of beating MacDonald, meanwhile the “Red King” is a big favorite with a 75.9% win probability.