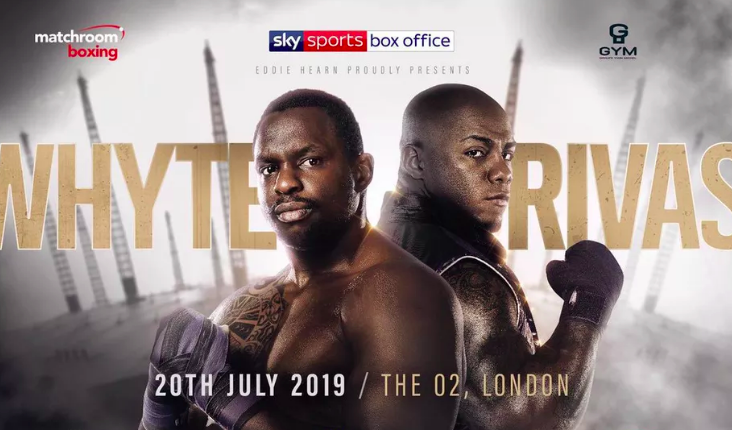 The winner is expected to get a shot at one of the three best heavyweights in the world, Tyson Fury, Anthony Joshua or Deontay Wilder. On Saturday night Wilder made a huge statement with an explosive first round knockout of Dominic Beazeale. Meanwhile Anthony Joshua will be taking on Andy Ruiz Jr on June 1, Joshua already defeated Whyte in 2015, but a rematch could certainly be on the cards if Whyte can defeat Rivas.

Oscar Rivas is currently ranked as the worlds 11th best heavyweight by BoxRec. He’s fought most of his boxing career with Canada and managed to keep a clean record with a win most recently over former heavyweight champion Bryant Jennings. Whyte has shown immense improvement from his 2015 loss to Joshua, picking up two wins over Dereck Chisora and Joseph Parker since then. Whyte opens as a major betting favorite over Rivas, but don’t let the odds fool you Riva’s is no joke and could easily cause an upset on the night here.

“His KO victory over Bryant Jennings sent shockwaves through the division and Tyson Fury just turned down ESPN/Top Rank’s offer to fight him,” Whyte said. “I am over the moon that he has accepted the fight. He has a great amateur and professional record, including a win over Kubrat Pulev [in the amateur ranks]. I am more than happy to carry on fighting top-10 fighters like Rivas until I get my well-earned shot at Deontay Wilder or Anthony Joshua.” source ESPN.

Whyte vs Rivas will be broadcast on Sky Sports Box Office pay-per-view, with promoter Eddie Hearn targeting Joseph Parker vs Dereck Chisora and Denis Lebedev vs Lawrence Okolie for the undercard.