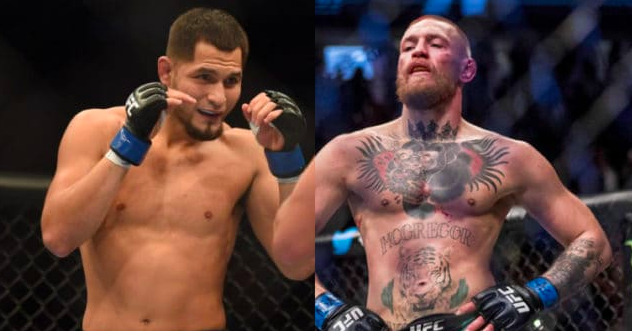 Jorge Masvidal is one of the hottest properties in the UFC right now, after his record breaking fastest knockout in UFC history against Ben Askren, he has catapulted himself into UFC stardom.

Conor McGregor opens as the betting underdog here, risk $100 to profit $140 if “The Notorious” one defeats “Gamebread”. Meanwhile Masvidal is a -160 favourite, wager $160 to make $100 profit. These opening UFC odds for McGregor vs Masvidal are available courtesy of BetOnline.com

The UFC now have the option of giving Masvidal a title shot against champion Kamaru Usman, or go for the money fight with Conor McGregor. It’s an easy paycheque according to Masvidal and he claims he’d break the Irishman.

Masvidal realizes that no one has pushed the needle this much in MMA in quite some time and the two fighters can certainly talk and back it up.

The discussion has now turned to what weight-class would Masvidal fight McGregor at if the fight does indeed go ahead. Masvidal is currently ranked #3 in the welterweight rankings with an expected title shot on the horizon, he has fought at lightweight where McGregor previously held the title there.

McGregor made weight at 170 pounds for his two Nate Diaz bouts, it’s clearly not his best performing weight-class but in terms of the UFC setting up a possible third UFC title shot in a different weight-class it could transpire for the Mystic Mac and Cuban Jesus.