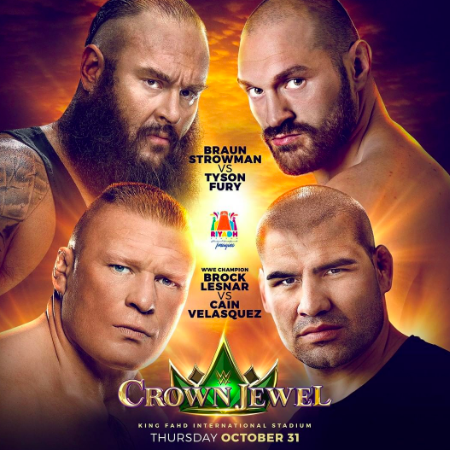 Over the past two weeks on Smackdown the WWE has build up a rivalry between two larger than life men that is Tyson Fury and Braun Strowman. Meanwhile, former UFC heavyweight champion Cain Velasquez has been on the Mexican wrestling circuit and made a surprise appearance on Smackdown to set the stage for a cross-over fight with WWE legend Brock Lesnar.

In the latest WWE betting odds from these online betting sites, Tyson Fury opens as the betting favourite – which may be a surprise since the boxer has little in-ring wrestling experience. He even looked a little stiff in his altercation against Strowman, however if you wanted to win $10 on ‘The Gypsy King’ you’d have to put down $70 at these current odds.

The monster among men Strowman is one of the WWE’s newer stars and a successful one at that, being the underdog here means if you wagered $100 you could net $400 if the big man wins.

Lesnar opens as the betting favourite here, if you bet $100 on the WWE champ you could profit $50 plus the additional $100 you put down. Velasquez is clearly an extremely talented athlete both in the UFC and his in-ring capabilities. He got the upper-hand on Lesnar in their first encounter, so what are the chances that will happen again at WWE Crown Jewel?

We’re not gonna lie it feels a little surreal seeing these two share the stage again, even for a pure pantomime event. The truth is real combat sports history exists between Lesnar – Velasquez. With Velasquez beating Lesnar for the UFC heavyweight title back at UFC 121 in summer 2010.

Billed as the most exciting WWE card in history, WWE Crown Jewel 2019 is set to take place in at the King Fahd International Stadium in Riyadh, Saudi Arabia on October 31.