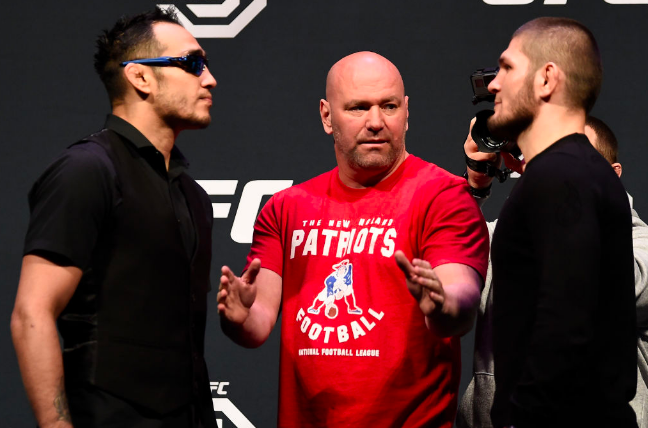 The UFC brass have spoken and Khabib vs Ferguson is on the cards yet again. Once the UFC gods allow this fight to finally take place, we could have one of the most anticipated UFC fights in history. We take a look at the opening betting odds for this lightweight title bout, set for Brooklyn in April 2020.

According to these online gambling sites for Khabib Nurmagomedov vs Tony Ferguson betting odds, the Dagestan champion is a major favourite to retain his lightweight title, bet $250 on Khabib to win $100 in profit. There is definitely more value in Tony Ferguson as an underdog here, a $100 bet on “El Cucuy” would payout $210 in profit.

Is Khabib the most dominant UFC fighter in history?

Nurmagomedov (28-0), has wiped the floor clean with every challenger the UFC has given him. He finally lost one round to Conor McGregor at UFC 229, but went on to win by submission in the fourth round. At UFC 242, Khabib defended his lightweight title against Dustin Poirier and once again he made a world class challenger look pedestrian.

Dominance is key to Khabib’s fight style. He’s not the best striker nor submission specialist, but he will control the majority of the fight and eventually wears down every challenger that stands in his way.

Does Tony Ferguson have Khabib’s Kryptonite?

Ferguson (25-3), has one of the most well-rounded arsenal of tricks in the UFC. His elbows are like razors and he can fight extremely well off his back, which is almost a given when inside the octagon with Khabib. Out of all the challnagers at lightweight there is a reason why everyone is so excited at the thoughts of this match-up and the truth is Ferguson might have the Kryptonite to Khabib’s pressure style fighting.

Let’s hope both fighters stay healthy and can make it into the Octagon in early 2020. Stay tune to Betting Insider Journal for all the latest sports new sand betting odds.

Between Khabib and Ferguson, who do you think will be victorious?