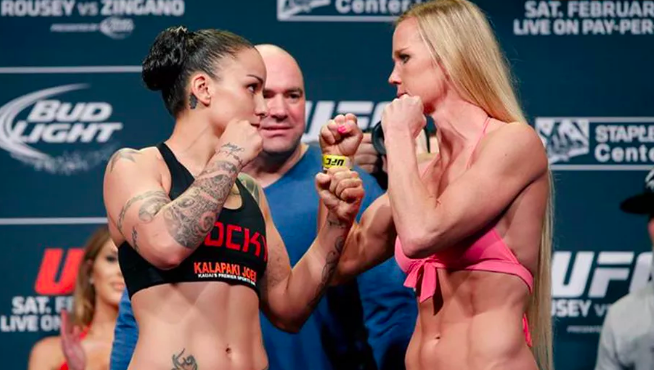 The co-main event at UFC 246 is set to feature two top women’s bantamweight contenders. The rematch between Holly Holm and Raquel Pennington is rebooked for Sat., Jan, 2019 inside the T-Mobile Arena in Las Vegas, Nevada. We take a brief look at Holm vs Pennington’s odds and give a prediction in this UFC 246 betting preview below.

In the opening betting odds between Holm and Pennington, the former champ Holm is the clear betting favourite. Bet $175 on Holm to win $100, in terms of winning probability that’s 63%. For Pennington as an underdog, bet $100 to win $130, she has a 43% chance of winning the rematch.

Are you looking for a betting site with a large sign-up bonus and generous UFC odds? Then look no further than our list of recommenced sportsbooks here.

In other UFC 246 related news the Odds Favor Conor McGregor to Finish Cowboy Cerrone in the 1st Round at UFC 246.

Holly Holm has a 78% takedown defense compared to Pennington’s 64%. In terms of significant strikes landed per minute, Pennington ranks higher here with 3.4 compared to Holm’s 2.8. Overall Holm stands out here with a total of 8 knockouts compared to just 1 for Pennington.

Holly Holm has won the womens bantamweight title since her first fight with Pennington. Since then “The Preachers Daughter” went on a three-fight losing skid then picked up some notable wins over Bethe Correia and Megan Anderson. Holm then came up short against Amanda Nunes by getting finished by strikes for the first time in her career.

Raquel Pennington has an unflattering UFC record of 10-7, and hasn’t shown much improvement since their first bout. This is still Pennington’s fight to prove the doubters wrong. She will have to stick and move against an elite kickboxer like Holly but it’s achievable for the veteran UFC fighter.

In the end expect Holly Holm to pull of the victory here and get the job done within the distance. What’s that.. another title shot for Holly?