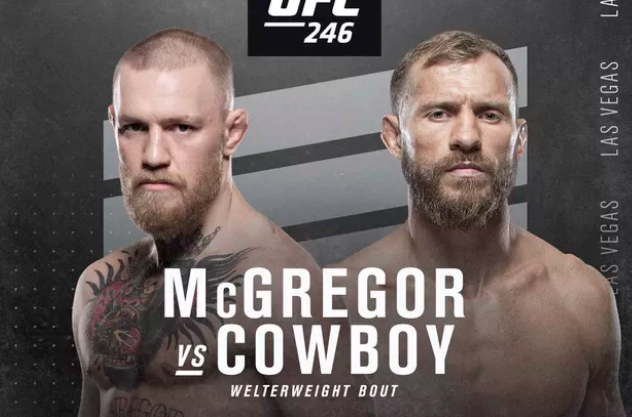 The UFC’s first event of 2020 is only a matter of days away. With Conor McGregor’s return there are many unanswered questions. For Cowboy Cerrone he has more ways to win this fight than McGregor. So let’s see what the latest odds are with some predictions for McGregor vs Cerrone at UFC 246.

The betting line according to our recommended sportsbooks for McGregor vs Cowboy has shown us the late money is been put on The Notorious one. In terms of winning probability that’s 74% in favor of McGregor, (Bet $334 to win $100). For Cowboy there is real value on his underdog value, (Bet $100 to win $250).

Will McGregor Surprise Us?

All the old footage of McGregor winning is prior to 2016, so expect Cowboy and his team to be watching this old footage which may have no bearing on the Conor we will see on Jan 18. Conor McGregor is the master of manipulation of beliefs, by faking the left hand to show us a new tool he has added to his game.

In a recent interview with McGregor’s long time trainer John Kavanagh, he claimed that McGregor was running his own training camp. However, McGregor almost contradicted that saying that he didn’t listen to his team leading up to the Khabib fight – so which is it? We believe McGregor is more dedicated and listens – but has the knowledge now to suggest which areas he needs to focus on the most.

Is Cowboy The Better Martial Artist?

Without a doubt Cowboy has more MMA experience and holds multiple records within the UFC. He has a more well-rounded game but doesn’t have key attributes like McGregor does. When it comes to distance management and fight IQ McGregor is still one of the best in the game.

Once UFC 246 rolls round we all know Cowboy likes when the temperature a little lower. He simply doesn’t handle the pressure like McGregor does, this will be key on fight night.

Will Cowboy use his wrestling and jiu-jitsu against against McGregor?

This is a common question many bettors are wondering. From the initial game plan we believe he won’t wrestle – but expect Cowboy to rely on it things go south. If he chooses to wrestle with McGregor, he will be entering the space of chaos where Cowboy can easily get finished.

Overall we foresee a return to form for Conor McGregor against Cowboy Cerrone – not quite UFC 205 level McGregor but a focused and fit one none the less. Cerrone has more ways to win but McGregor simply has the x-factor. With proven take-down defense of 70% that’s underrated for McGregor, who should be able to keep the potential takedowns at bay. Expect Cowboy’s kicks to be a huge part of his game plan, from the deadly head kick to low kicks attacking McGregor’s wide stance.

Conor McGregor’s timing and movement will be vital to move or correctly defend himself from these attacks. If Cowboy decides to stand and box with McGregor this fight could end within 2 rounds.

If you are looking to bet on the exact method of victory our McGregor vs Cerrone Betting Props post has you covered.

Alternatively if you are confident in the round either fight will win, our McGregor vs Cowboy Round Betting Odds post covers those odds.