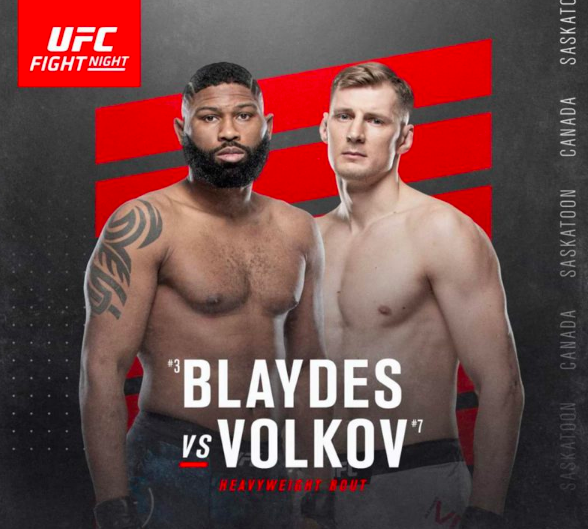 The UFC will move it’s two events in Saskatoon, Canada back to the UFC Apex in Vegas. The second of which is headlined by two contending heavyweights with Curtis Blaydes taking on Alexander Volkov.

Curtis Blaydes has a winning probability of 70% over Alexander Volkov. That means if you bet $235 you could profit $100 on Razor Blaydes.

Be sure to visit our recommended list of betting sites prior to betting at UFC Saskatoon.

Alexander Volkov’s only loss in the UFC was to Derrick Lewis at UFC 229, with 11 seconds left on the clock. Since then Volkov picked up a decision win over Greg Hardy. At 2/1 Volkov offers great underdog value if you combine him with a favorite for a parlay bet.

However no one can deny Curtis Blaydes is championship material, with explosive power and wrestling pedigree he’s trouble for any heavyweight.

Outside of Francis Ngannou, Blaydes needs to win to show he his the next #1 title contender.

Expect this fight to be more competitive than the oddsmakers suggest. Given that it’s 5 rounds, Blaydes can take his time and figure out Volkov with increasing damage as the rounds progress.

If Blaydes doesn’t get Volkov out there by the end of the fifth round, this could be Volkov’s chance to win by decision.

According to the early odds Marc-André Barriault is the slight betting favorite. Bet $123 on Quebec’s Barriault to win $100.

The betting line is extremely close here making this a pick’em fight. Both fighters are on a 3-loss skid, so a win here is essential to remian in the UFC.

0 comments on “UFC Betting Odds & Prediction for Blaydes vs. Volkov”