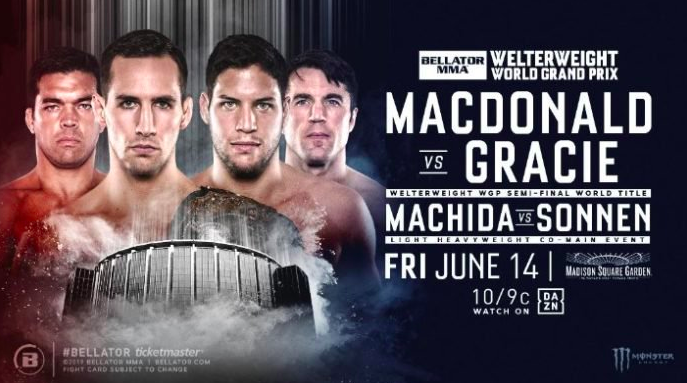 All Bellator 22 odds available on Sportsbetting.ag.

An asterisk looms over MacDonald for many who doubt his heart is in the game anymore, after a lacklustre performance against Jon Fitch that ended in a draw – letting MacDonald narrowly proceed to the next stage of the tournament.

We hope Rory has addressed these issues and has his fighting spirit back again, the betting line is closer than expected between MacDonald and Gracie.

MacDonald simply has more tricks in his bag as a well-rounded MMA fighter, as a slight underdog we believe The Red King will return at Bellator 222.

On the co-main The American Gangster Chael Sonnen will face off against Lyoto Machida in a lightheavy weight bout. At this stage of his career Sonnen spends most of his time on the commentary and analysis side of the game, however we know Machida has struggled with wrestlers before.

We still see the clear advantage in Machida’s favor with his striking, but in terms of betting value Sonnen is worth a smaller wager as an underdog.

After one pro-mma fight in Bellator the next coming of GSP (we joke), Dillion Danis makes his long awaited return. Obviously Danis has tones to prove inside the cage, as one of Conor McGregor’s training partners Danis brings a crisp Jiu-Jitsu game but lacks in the stand-up department.

Max Humphrey is the type of opponent that Bellator should be feeding Danis, Humphrey is (3-2) and has only fought in smaller organizations.