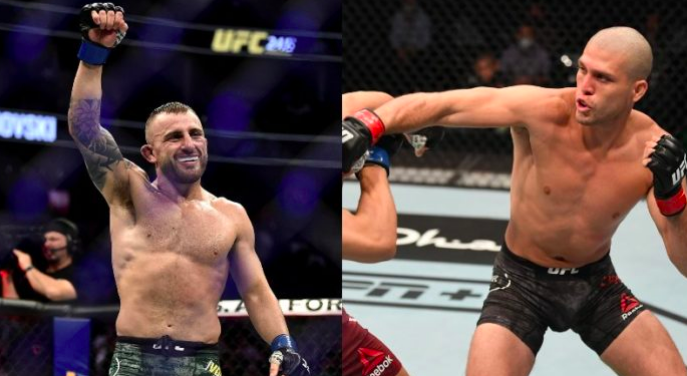 The UFC featherweight title will be on the line at UFC 260, which is scheduled for March 27.

This fight will feature as the co-main to Stipe Miocic vs Francis Ngannou 2 for the heavyweight title. We review the latest UFC 260 odds for Alexander Volkanovski vs Brian Ortega.

The champion Alexander Volkanovski opened as a modest favorite when this fight was announced. At -185, you can bet $185 to win $100 on Volkanovski retaining his featherweight strap. Ortega is a +155 underdog, bet $100 to win $155.

When the betting line opened for Volkanovski vs Ortega, the challenger Ortega was +130, now he’s averaging +155. For Volkanovski the lowest we’ve seen him was -179, now averaging around -185.

For Brian Ortega, this will be his second title shot since losing to Max Holloway at UFC 231 in December 2018.

Since then “T-City” took some time off and came back with a dominant win over the Korean Zombie last year, where Ortega was also the betting underdog.

The rematch between Stipe and Nganaou is has been targeted to headline UFC 260. It was at UFC 220 in 2018 where Miocic took a convincing unanimous decision victory over Ngannou to defend his title. That fight saw Ngannou at a loss when it came to solving Miocic’s high-pressure wrestling offense.