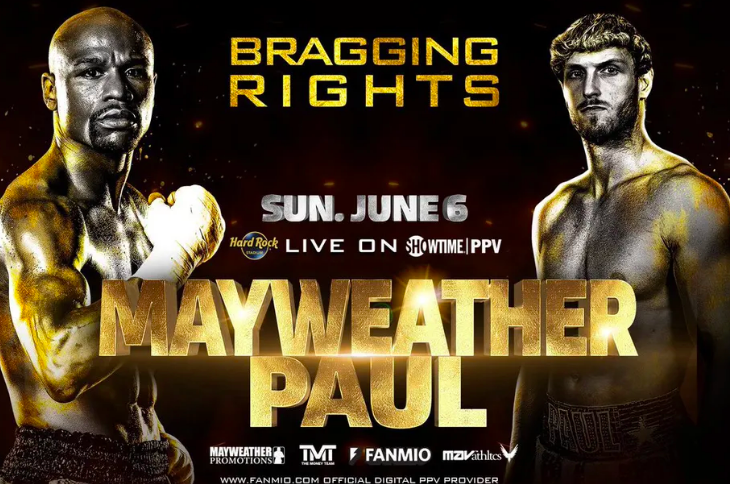 Floyd Mayweather Jr and Logan Paul’s exhibition boxing match has been confirmed to kick off the summer. Coming off the heels of his brother’s KO win over former MMA star Ben Askren, can Logan Paul shock the world with a with over Mayweather?

According to the latest boxing odds for Mayweather vs Paul, the undefeated “Money Mayweather” is growing as a -2500 to -3000 betting favorite.

At these current odds, you would have to wager a substantial amount to make any profit. Be sure to check out the prop bets for winning by stoppage or decision for more lucrative ways to bet on this fight.

To get the best promos for betting on this fight, check out our list of betting sites reviewed here.

From YouTube star to challenging one of boxing’s greatest defensive fighter of all time is quite the climb for Logan Paul. Yet he remains a -1000 underdog, which is quite common in boxing. You can bet $100 to net $1000 on Logan Paul defeating Floyd Mayweather.

Yes, we know. How could you possibly pick Logan Paul over the legendary Floyd Mayweather. We’ll let’s just say Floyd wants a huge payday, he could carry Logan Paul a couple of rounds and make a mistake. Boxing is a game of inches and there is no one better at real life chess than Mayweather.

Eventually, father time catches up with us all. Especially in combat sports, we’ve all seen our childhood heroes go too long, and eventually, the hungry lion comes up and takes it all away.

Logan Paul is technically cruiserweight and would be more suited to fighting a heavyweight at catchweight. According to DAZN, the weight limit of 160lbs for Mayweather and 190lbs for Paul, who at 6’2” stands four inches taller than Mayweather.

That all being said, this exhibition fight will take place on Showtime PPV so Floyd won’t want to make a complete mockery of the sport – or will he? What I’m expecting is another masterclass of Floyd’s showmanship, being able to sell a fight and entertain the crowd – while still making Paul look like he still has a chance to crush the 50-0 boxer.

Betting on Mayweather vs Paul Takeaway

Obviously, Floyd Mayweather is the clear favorite. The last time the 44-year-old entered the ring was on New Year’s Eve 2018 when he defeated Japanese kickboxer Tenshin Nasukawa via first-round TKO in an exhibition match.

His last professional bout was a 10th round TKO of UFC star Conor McGregor in 2017, improving his career record to 50-0.

Ultimately I think the betting odds are locked in for this fight. Mayweather will remain a sizable favorite over Paul, expect some huge wagers coming on from the sharks in favor of Mayweather and those newer to the sport who think Logan Paul has a chance.

Celebrity boxing or YouTubers boxing isn’t really a new thing. At the end of the day, they’re essentially light entertainers. Throughout history, there have been some fine examples of actors who trained for boxing roles, that could have turned pro by the end of their training.

Fast forward to 2021 and the era of athletes and entertainers crossing over to professional boxing remains a regular occurrence. It is instantly consumable entertainment, and easily marketable to the masses.

Once the public keeps a reasonable level of demand for these type of fights, they will continue. Props to Paul for landing this pay day and finding his red panty night among the rest of the YouTube noise that has come our way over the years.

One thought on “Boxing Odds & Predictions for Mayweather vs Logan Paul”