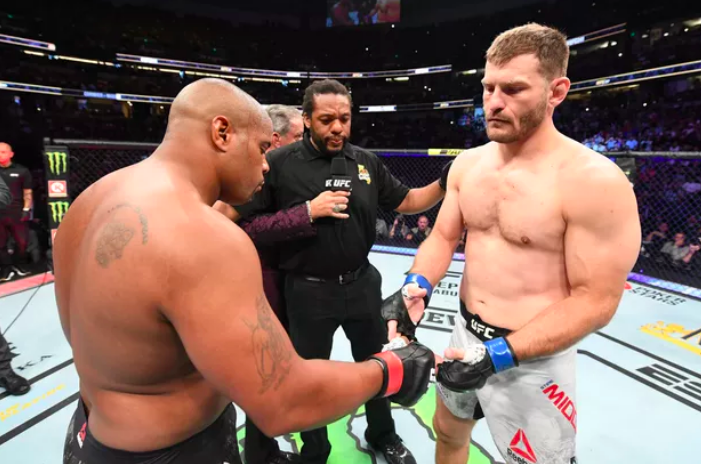 The trilogy fight between Daniel Cormier and Stipe Miocic has been confirmed for UFC 252 on August 15, with location TBD. We preview the opening odds for DC vs Stipe 3 below.

Our full coverage of UFC 252 Betting Odds & Picks is now live for all you fans wondering where to bet on UFC 252.

We review UFC betting sites so you don’t have to, all listed here.

Who has the Edge?

The oddsmakers have it right here for the third Stipe vs DC betting line. With Daniel Cormier defeating Stipe in their first bout by 1st round KO at UFC 226. Cormier then took a fight in-between the rematch, defending his new heavyweight title against Derrick Lewis and winning by submission at UFC 230.

Then at UFC 241 the rematch between Stipe and DC was a much more competitive one and one of the most exciting fights in heavyweight history. A back and forth affair, where Stipe’s patience payed off and Cormier lost by 4th round TKO.

The stage is now set and we are at one a piece, and Cormier is 41 years of age. Is the tide finally starting to turn for DC? We believe so, with Stipe learning from his first loss and keeping his distance from Cormier’s dirty boxing and elbows in the rematch.

According to TheScore.com, for their rematch Stipe says the layoff was a ‘blessing’. Will another lengthy layoff work in his favor this time around?

It will be almost a year since the rematch to the day once UFC 252 rolls around. At this stage of their career don’t expect a huge amount of new skills to be displayed but a new game plan from either opponent is expected.

This fight could play out in a multitude of ways, with a quick KO always a possibility at heavyweight. Our early prediction for DC vs Stipe 3 is, Stipe by TKO/KO.