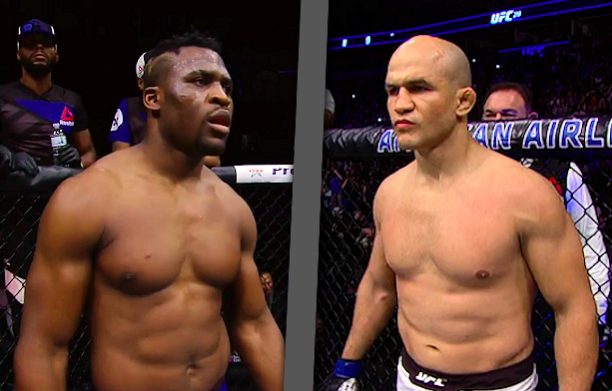 UFC 239 just got a whole lot more exciting, with the announcement of two hard-hitting heavyweights added to the card. Francis Ngannou will take on Junior dos Santos as both men look to get into title contention again with another win under their belt.

This match-up makes perfect sense with both fighters gaining momentum after their most recent wins, dos Santos (21-5) is currently on three-fight win streak which includes a TKO of Derrick Lewis at UFC Wichita. He’s also beaten Tai Tuivasa and Blagoi Ivanov along the way, which makes this his best win-streak since the second Cain Velasquez fight in 2012.

Francis Ngannou began his UFC run with a big push from the UFC, however the hype-train was derailed by Stipe Miocic, “The Predator” then looked a shadow of his former self against Derek Lewis. Ngannou showed immense self-reflection and mental strength as he shook off these performances and has since plowed through Curtis Blaydes and Cain Velesquez, both first-round finishes.

The opening odds give Ngannou the upper-hand over dos Santos, with the power Ngannou possess and his confidence back on track. The oddsmakers give dos Santos a 35% chance of beating Ngannou, he will have to utilize his movement and increase his defense to avoid Ngannou’s bombs, and possible drag the fight into the later rounds to get his hand raised.

This fight was originally scheduled for UFC 239, which is still stacked, to see betting odds for these fights on card – we have you covered.