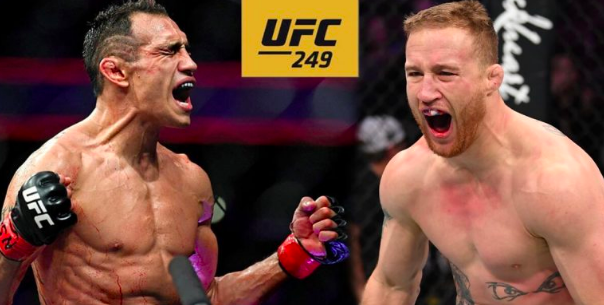 News broke earlier today that Justin Gaethje has signed the contract to fight Tony Ferguson for the interim title at UFC 249.

Gaethje has stepped up to replace lightweight champion Khabib Nurmagomedov who is stranded in Russia with the current travel ban. Below we preview the opening betting odds for Ferguson vs Gaethje.

In the opening UFC 249 odds Tony Ferguson has a 69.2% chance of defeating Justin Gaethje. That means you would have to bet $170 to win $100 if “El Cucuy” can win his second interim lightweight title.

Searching where to bet on UFC 249? We have you covered with our list of recommended UFC betting sites here.

What to expect from Ferguson vs Gaethje

Tony Ferguson and Justin Gaethje are two of most exciting lightweights in the world right now. Whether we will get both fighters at their peak that will remain to be seen.

Ferguson has an arsenal of tools including razor sharp elbows and a unique ground game. To match that Gaethje has knockout power and under used wrestling. They both have incredible gas tanks that could result in a five-round war.

While many fans believe Ferguson should be an even bigger betting favorite, Gaethje could be the one to end his win streak as a last minute underdog.

Once the betting props are released for UFC 249 Betting Insider Journal will have you covered.

The location for UFC 249 is expected to be released within the next day. Rumours are that Native American Reserve on the west coast will serve as the location due to all the restrictions from the government.

With no fans in attendance and limited staff Dana White is still determined to pull off a huge PPV event and with everyone stuck inside you can expect it to be a huge draw and major time for fans to start betting again.

*Update – Justin Gaethje will face Khabib Nurmagomedov to unify the lightweight title on October 24, we’ve covered the odds for Khabib vs Gaethje here.