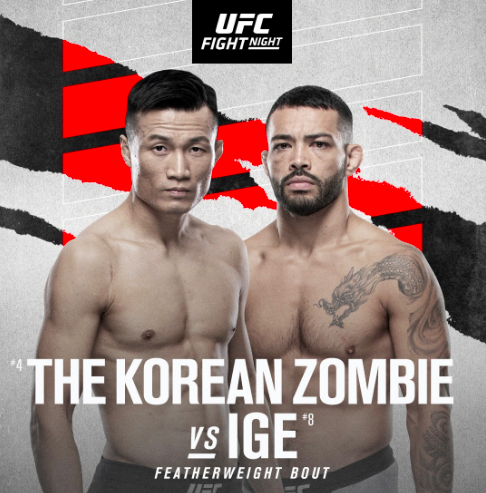 Dan Ige returns to action to take on Chan Sung June aka “The Korean Zombie” at UFC on ESPN 25. Ige called for this night and now his wish is granted. This fight is a real pick em’, let’s see where the best value is for betting on Korean Zombie vs Ige.

The opening betting line for TKZ vs Ige is virtually identical. With a $110 wager on either opponent, profiting $100 plus the money you put down. Taking a deeper dive into the odds, it seems that Jung is slighting favored by some online sportsbooks, coming in at -118 and Ige -106 on Draftkings sportsbook.

Ige is ranked #8 in the UFC featherweight rankings and is coming off a KO win over Gavin Tucker at UFC Fight Night 187. On the heels of that 22 second KO, Ige has his sights higher up the rankings and the “The Korean Zombie” accepted Ige’s challenge.

The Korean Zombie is a household and UFC fan favorite. After a two-win fight streak with wins over Renato Moicano and Frankie Edgar, Zombie lost by decision to an immensely improved Brian Ortega. Zombie is still ranked within the top five at featherweight and a win here could really project him back into another title eliminator fight.

Meanwhile, Ige has only two UFC losses and has never been finished. He enters this fight with a higher striking accuracy 46% compared to Zombie’s 41% and slightly better striking defense. In terms of high volume, Zombie lands 4.15 (SLpm), vs Ige at 3.96. If The Zombie’s aggression is too much for Ige, expect him to attempt some takedowns. He averages 1.68 per 15 minutes, but Zombie’s takedown defense is solid at 75%.

This is a high risk low reward fight for The Korean Zombie. At 34, he has the potential for one more title run. Standing in his way is the constantly overlooked Ige. Ige has quite the chin and was also the betting underdog against Edson Barboza, Mirsad Bektić and Kevin Aguilar – all fights he had his hand raised.

Zombie comes in aggressive and is the kind of fighter that is hittable. I expect Ige and Zombie to go toe to toe and stand and trade. That being said, I believe that’s why it’s such a pick em’ this fight, we could see a finish within three rounds for either opponent. Ige is a great pressure fighter and is technically the more sound fighter. In the end, though it’s now Ige’s time to shine and push the pace over five rounds, to score a decision on the judge’s scorecards.