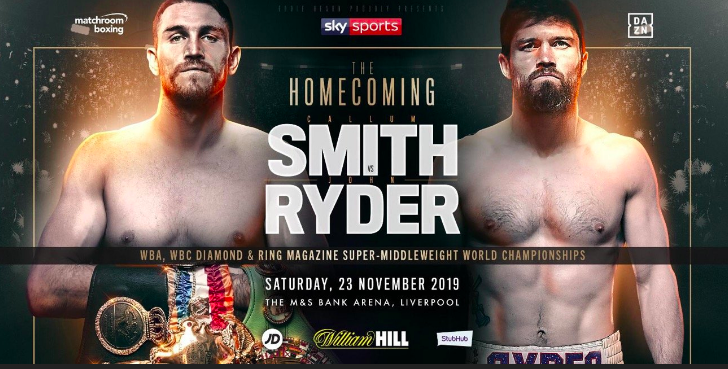 Callum Smith’s mandatory challenger is John Ryder, the opening betting odds for Smith vs Ryder pit Ryder as a massive underdog. Let’s take a look at the odds and see if they are deserved.

Smith opens as the betting favourite across the board from our reviewed betting sites, bet $180 to make $10 profit on the undefeated champ. It might be better value waiting to see what betting props come up for a more specific bet on Smith, by round betting on the later rounds. If you fancied a small wager on Ryder, at 8/1 a $100 bet would payout $800.

Callum Smith is one of most talented boxers on the planet right now, since turning pro in 2012 he has won all of his 26 fights. Smith picked up the WBA World title and was crowned World Boxing Super Series Champion.

“I can’t tell you how excited I am to return to Liverpool as world champion to defend my titles.. It’s always been a dream of mine to bring world championship boxing to the city and hopefully this is the first of a big run of fights here.” Said Smith according to BBC Sport.

Ryder (28-4), is Smith’s WBA mandatory challenger – he has won 28 and lost four of his 32 professional fights. While having had a successful career that seen him face some of the best in British boxing, Ryder has come up short against the likes of Billy Joe Saunders and Rocky Fielding. Sure, he can cause an upset on the night but chances are the oddsmakers are right at 8/1 on most online betting sites.

If Smith can get past Ryder expect big things for the Liverpudlian. A clash against Billy Joe Saunders, a legacy fight for GGG or perhaps Canelo can come back down in weight and contest for yet another title? Stay tuned to Betting Insider Journal for all the latest boxing news and betting analysis.