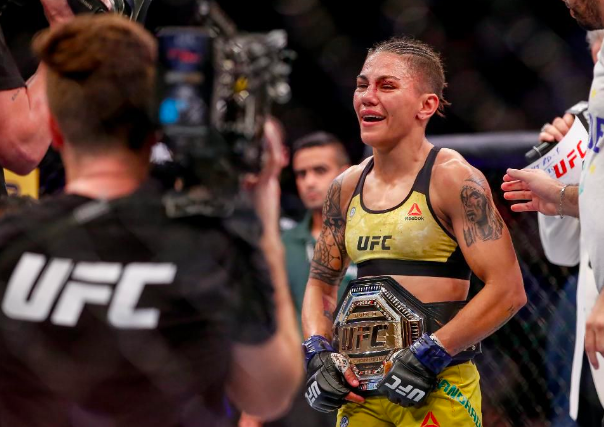 Jessica Andrade’s first title defense is close to being finalized by The UFC according to multiple sources. The new strawweight champion dropped Rose Namajunas on her head in the second round, to become the new champion in her home country of Brazil.

Andrade is expected to face Weili Zhang and it will headline UFC Fight Night on Aug. 31 at UFC Shenzhen China. Andrade opens as expected the betting favorite against Zhang, expect this line to move over the coming weeks.

Zhang is a well-rounded athlete currently (19-1), she rose to fame through the ranks in Chinese based Kunlun Fight MMA. Most recently coming off a decision win over Tecia Torres at UFC 235.

Weili Zhang was an unexpected choice form the UFC, not to dismiss Zhang but she only has 3 UFC fights under her belt and hasn’t been promoted by the organization.

The rest of the UFC straweight division is tied up for the most part, with Tatiana Suarez defeating Nina Ansaroff at UFC 238 and expected to heal from a neck injury she had prior to the fight. Michelle Waterson is ranked just above Zhang in the straweight rankings and has issues with not being next in line for a title shot.

Michelle Waterson said “I love Dana. We have a great relationship, I respect him. I just think he’s really busy, he has a lot on his hands and he has to take care of a lot of fighters. At the end of the day he’s probably given, you know, a breakdown or lineup of the fighters and just a list of the rankings and he talks about the fighters that way. – source Sherdog.com