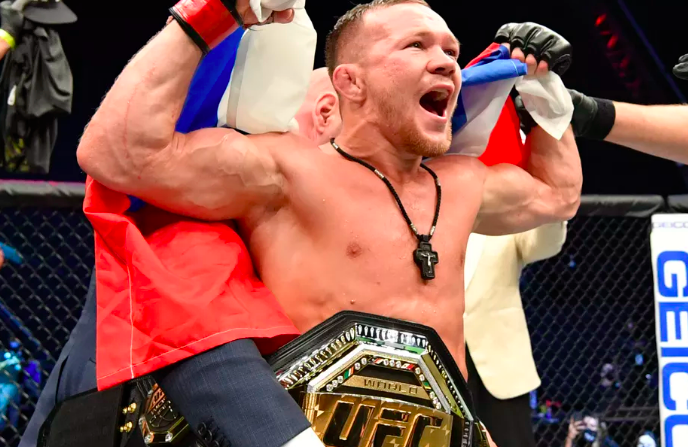 It appears Aljamain Sterling will finally get his title shot against Petr Yan at UFC 259. After UFC on ESPN 15, Dana White confirmed Sterling would be next in line for a crack at the 135-pound strap.

Aljamain Sterling Next in Line

It’s been a long road for Aljamain Sterling back to title contention. From losing to Marlon Moraes back in 2017, the “Funk Master” has went on a five-win fight streak. For Aljamain Sterling the stars are aligning perfectly to become the new bantamweight champion.

This is a high stakes fight for both fighters. The type of title bout that is actually deserved, which doesn’t come along too often in the bantamweight division. Petr Yan proved his worth against a weathered Aldo to win the title, now it’s time to defend it against a true #1 contender.

With Frankie Edgar picking up a win over Pedro Munhoz, we can expect the UFC let Edgar fight the winner similar to how Aldo was given the special UFC veteran treatment.

We haven’t seen many of Yan’s opponents go for the takedown, so this could be part of Sterling’s game plan. The “Funk Master”is a BJJ black belt under Matt Sera and 42% of his wins come by submission.

“It should be noted that in his more recent fights against Dodson and Rivera Yan showed more urgency on the bottom, so it’s likely that his earlier struggles on the bottom were the result of inexperience rather than lack of ability or ignoring the guard in training.” – Source thefight-site.com.

Yan the younger of the two by four years, comes with a menacing aura of fearlessness. After learning to fight on the streets of Russia, Yan turned to martial arts to hone his craft. We expect Yan to put the pressure on Sterling early in what could be a fight of the year candidate.

Yan vs Sterling will be one of three title fights at UFC 259. For opening odds on the main fight between Nunes vs Anderson click here. While the co-main is set to feature Adesanya challenge Blachowicz for the light heavyweight title. We have previewed the latest UFC 256 odds for that bout here.

Who do you think will have their hand raised at UFC 259? Leave a comment below!