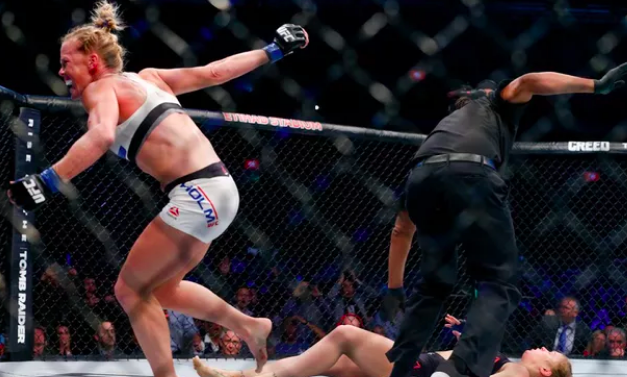 2019 was the 26th year of the Ultimate Fighting Championship, and during that time the Octagon has played host to some of the most memorable moments in mixed martial arts. From McGregor’s 13-second knockout of Jose Aldo to Ronda Rousey’s surprise defeat at the hands of Holly Holm a month earlier, we take a look at five of the most memorable knockouts in UFC history.

UFC 194: Aldo v McGregor was the most highly anticipated bout of 2015, with more than 16,000 fans packing the MGM Grand Garden Arena in Las Vegas and over a million tuning in on TV for the headline event. Aldo was the current featherweight champion and in the decade prior to the December bout against McGregor he was undefeated in 18 fights. McGregor, two years into his UFC career, was looking to take his crown. An enthralling battle was expected, but within 13 seconds the fight was over.

Just nine seconds after the men refused to touch gloves and began the fight, McGregor connected with Aldo’s chin with a pure left hook knocking him to the ground, before a couple of hammer fists rendered the Brazilian unconscious. It was an extraordinary result and one which gave McGregor the title of undisputed UFC Featherweight Champion; only the second time that feat had ever been accomplished. McGregor collected a cool $500,000 at a tick under $40,000 per second in what was the quickest end to a title fight in UFC history, and The Notorious began his reign thereafter.

The headline fight at UFC 162 wasn’t tipped to be a particularly close one. Anderson Silva had for a long time been the title holder, while his opponent in Chris Weidman had been involved in just nine fights prior and hadn’t entered the Octagon for almost a year as a result of injury. Silva headed in as heavy favourite as a result, and few gave the challenger much of a shot of competing. Throughout the first round, however, the 29-year-old from New York gave his much more highly fancied opponent a surprise in the first round, landing a number of punches and winning the round comfortably.

Silva came out showboating in the second, looking to convince the judges that he was in control of the fight and trying to bait the less experienced Weidman into a mistake. Instead, however, the champion got a major shock when, after dodging three punches, Weidman got him with a left hook and sent him to the floor. Another right while Silva was dead to the world ended the fight, and Weidman was the new UFC middleweight champion after one of the sport’s greatest ever upsets.

Barboza v Etim didn’t have the same hype as the aforementioned two fights in its lead up. In fact, it wasn’t even the headline event at UFC 142 at the HSBC Arena in Rio de Janeiro, Brazil – Jose Aldo’s defeat of Chad Mendes took that mantle. Despite that, it was the most memorable fight of the evening and one of the most memorable of all time as Barboza knocked out Etim at the beginning of the third round with the first spinning wheel-kick KO in UFC history. Barboza, in front of his home crowd, appeared to have Englishman Etim covered over the first couple of rounds, but no one could have predicted what happened a couple of minutes into the third round. The spinning wheel-kick, which Barboza afterwards claimed he very rarely practiced, connected perfectly, bringing about one of the most unforgettable moments in the history of the UFC.

UFC 52 was held at the MGM Grand Arena in Las Vegas, and with the coaches of TV series The Ultimate Fighter headlining the event it earned over $2.5 million in ticket sales – the most ever at the time. And the sales proved justified, with the card ultimately being remembered as one of the best in UFC history. Liddell and Couture had met prior to this event, with Couture having defeated ‘The Iceman’ by knockout a couple of years earlier, but on this occasion, things took a different turn.

Less than two minutes into the first round, Couture claimed to have received a poke in the eye, and a timeout was called. It proved a decisive moment. Randy came out swinging from the timeout and it ultimately proved his downfall, as Chuck saw an opportunity and connected with a clean right hand, sending his opponent to the floor of the Octagon. A couple bigger hits later and the fight was over just over two minutes into the first round, with Liddell getting revenge for the KO he suffered at the hands of Couture a couple of years earlier and earning the title of UFC Light Heavyweight Champion in the process.

Etihad Stadium had never played host to a UFC event before 2015. Typically used for Australian Rules football, the stadium has a capacity of well over 50,000, and the crowd of 56,214 which piled in for UFC 193 was at the time the biggest in UFC history. The headline event saw Ronda Rousey in her seventh title defense up against Holly Holm, a relative newcomer to UFC who had made a name for herself with a hugely impressive boxing career. Unsurprisingly, the exciting MMA odds were heavily in the favour of Rousey, who at the time had never lost a fight. Very early on in the fight, however, it became clear that the underdog was in with a chance, with Holm’s superior striking making her a tough matchup for Rousey throughout the first round.

In the second round, that chance turned into a reality as the former boxer connected with a high kick to the neck, knocking out the champion in what would be Rousey’s last fight in over a year. McGregor’s knockout of Aldo a month later perhaps took the cake of the most memorable UFC moment of the year, but this result was not too far behind.