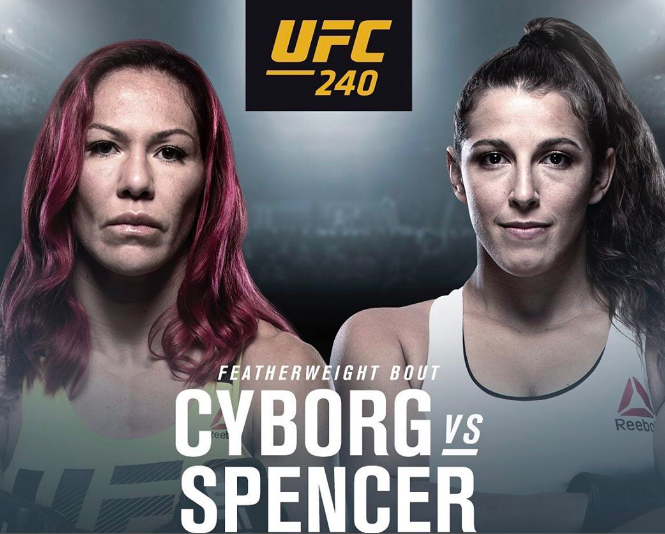 Cris Cyborg is set to make her return to the UFC after a shocking loss to current champ Amanda Nunes. Cyborg will take on the newest hyped contender on the roster Felicia Spencer at UFC 240 in Edmonton, Alberta on July 27.

Cyborg opens as the betting favorite here at -550, if you wagered $55 you could profit $10. Meanwhile, Spencer as a +400 underdog offers great value for the former Invicta FC champion, risk $100 on Spencer could payout $400 in profit.

Cyborg (20-2), lost her title in let’s just say it – a brawl. One of which could go either way if she get’s her rematch against Nunes. Except for one no contest in 2011 due to a banned substance, Cris Cyborg had been undefeated since 2005 until the Amanda Nunes fight, expect her to be hungrier than ever.

Spencer (7-0), has just one UFC fight under her belt and is already getting catapulted up there with Cris Cyborg. Her MMA resume is short but impressive none the less, with four of her seven fights winning by way of submission, including her last bout against Megan Anderson.

In the striking department Cyborg lands on average 6.99 vs Spencers 6.47 per minute. Spencer has the advantage in striking accuracy with 77% vs Cyborg at 57%, however with Cyborg having almost three times as many fights this statistic isn’t the most reliable to compare.

Once Cyborg can avoid Spencers ground game it should be a one sided victory for the former-champ, expect her to get done in the later rounds.

This fight will serve as a co-main to Max Holloway vs Frankie Edgar.