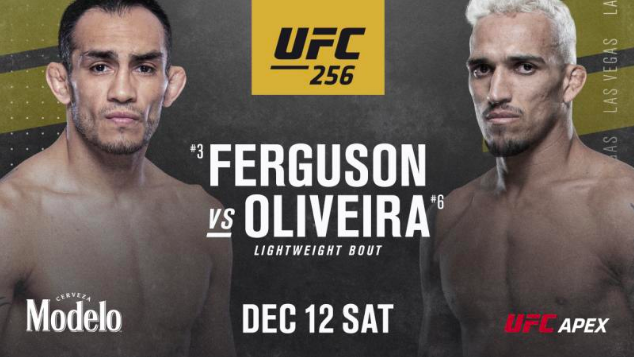 UFC 256 will go down December 12, at the UFC Apex. Headlining the night is Figueiredo vs Moreno for the flyweight title. I see the co-main as the people’s main event – with Ferguson vs Oliveira throwing down! Let’s check out the odds & prediction below.

The opening UFC 256 odds according to MyBookie, are favoring Tony Ferguson with an implied win probability of 60% to win this fight. Bet $150 to win $100.

Prediction for Ferguson vs Oliveira

First off, this fight is going to be fireworks. Both are gamers and finishers. Charles Oliveira has been putting together his game like the best of UFC. Oliveira is on a 7 win fight streak, and is the most-underrated fighter in the lightweight division.

Charles Oliveira has improved a tone in recent years and is a beast anywhere this fight goes. They’re are similarities between both fighters, with the edge going towards Ferguson, being the bigger fighter that hits harder.

In terms of UFC fight stats, Tony has lands 5.08 significant strikes per minute compared to Charles at 3.27. When it comes to takedowns Charles averages 2.61 0.49 per 15 mins for Tony.

Taking a look at the damage Ferguson took against Gaethje, is slightly worrying. Tony has the wrestling background which could play a part in this fight. At 37, age is something is be taken into consideration for a fighter. For Tony though, he’s so conditioned and is a cardio machine – so we don’t see him slowing down just yet.

That all being said, we are picking “El Cucuy”, to pick apart Charles Oliveira and to get his hand raised at UFC 256.

Charles Oliveira ready to ‘shock the world’ against Ferguson

In an interview with SuperLutas, Charles Oliveira had this to say:

“Tony is a hard guy to fight. You can be striking and all of a sudden he goes for your legs. You’re trading shots and he throws a spinning elbow. He’s hard to tire out, too. He’s always walking forward and hitting you. That’s my main concern, his volume. A fight is a fight, but I think I’ll do better in the grappling department. Of course I’ll need to stay alert. He has great D’arce chokes, guillotines. He’s a smart, slick guy. I’ll shock the world. I’ll fight like never before. Very focused. Following the game-plan we set up. I want to make it happen.”

Who do you think will get their hand raised at UFC 256? Leave a comment below!