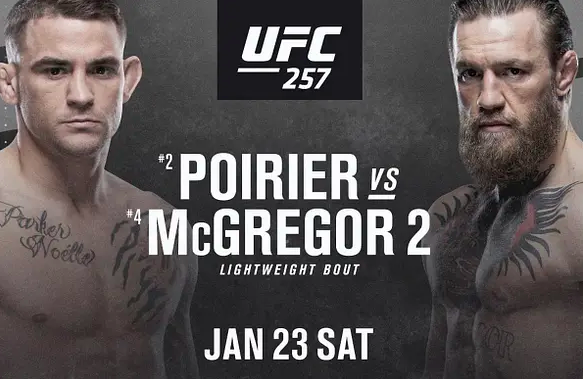 It’s UFC 257 fight week, where Dustin Poirier will get a second crack at Conor McGregor. In this article, we review the opening to current odds for McGregor vs Poirier 2.

Initially, McGregor opened as a -200 favorite, now that we’ve seen more public money go on him he’s dropped to -275. Poirier was +160 when odds were first released you can now bet on the “Diamond’ at +210 on most online sportsbooks.

Betting on McGregor as a -275 can be a risky bet for much less return than when odds were first released. For the best value bets, check out our McGregor vs Poirier prop bets guide.

We have also given an in-depth breakdown of McGregor vs Poirier, with UFC 257 predictions on this page.

Latest Odds for McGregor vs Poirier 2

MyBookie’s latest odds for McGregor vs Poirier can be found here. Keep in mind these odds can change, so expect McGregor to grow as an even bigger favorite as the bets come in.

News broke last week that limited fans will be allowed at UFC 257. Historically the fans have made a Conor McGregor show what it is. Flying in the hordes over from Ireland and bringing an atmosphere to the week like none other.

January is turning into Conor McGregor’s month, after lighting up 2020 with a huge win over Donald Cerrone last January. The Irishman intends to start 2021 with the same momentum.

How The Rematch Came About

When this fight was originally proposed by McGregor, it was billed as a charity boxing bout. Which the UFC would obviously want an involvement in, just like when McGregor boxed Mayweather.

Now UFC 257 has a headliner and it’s a rematch at lightweight. It’s not expected to be for an interim or vacant title, as Khabib’s official retirement plans remain undecided yet. The 29-0 champion, is now ranked #1 P4P in the UFC’s rankings.

Back when this fight was first pitched by McGregor, it was marketed as a martial arts spar exhibition. Which will obviously continue the feud ‘The Notorious’ one has with the UFC, which is ongoing.

It wasn’t long ago when McGregor announced plans to box Manny Pacquiao, where he opened as a huge betting underdog to PacMan.