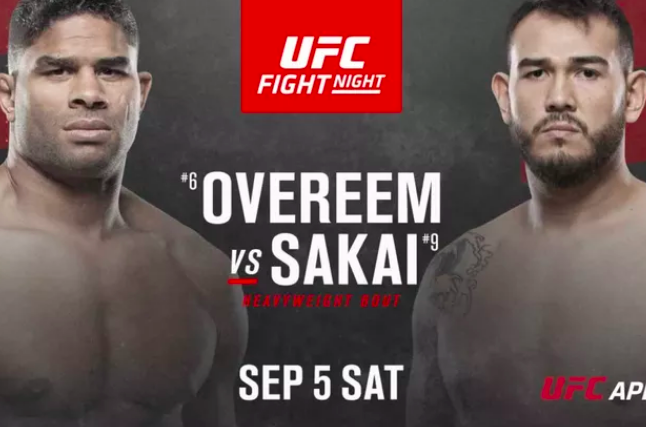 Some great matchmaking here by the UFC brass. #6 taking on #9, two predominanty strikers and both with leverage to gain from fighting each other. The Reem ideally needs another top ten win before he makes his way back into the top five.

In a recent interview in Sherdog.com, Sakai believes that the smaller octagon of the UFC Apex in Las Vegas will be an advantage him.

“Overeem changed a lot of his style lately,” said the muay Thai pupil of Fabio Noguchi, who was the first master of Anderson Silva. “He is not aggressive like in old times. [He] is looking more for takedowns, like he did with [Jairzinho] Rozenstruik and avoiding strong striking exchanges.

What we have here is a fight of youth in Sakai vs the experience of Overeem. Sakai has never been finished and wins by KO or decision, with no submission wins under his belt.

Overeem has 14 KO losses and his chin hasn’t held up as well, later in his UFC career. However he is the most accurate sticker in the UFC . Expect Sakai to come forward and try to bully Overeem; as the slightly bigger fighter. Overeem will have to utilize his clinch and knees to damage Sakai when he is closer in range.

When Sakai faces more experienced fighters he does tend to struggle, for example his split decision win over Blagoy Ivanov recently. Going by how Overeem looked in his last fight we are giving him the edge over Sakai.