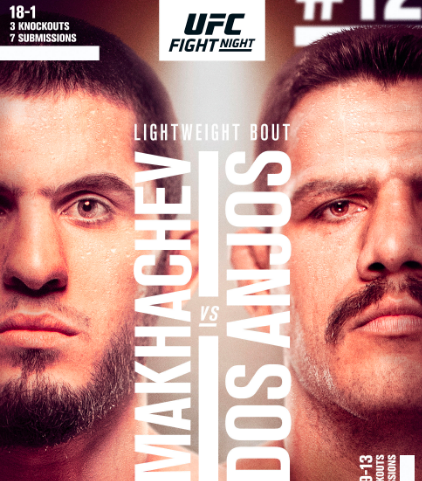 Makhachev vs dos Anjos is finally happening, after dos Anjos couldn’t fight due to COVID at UFC 254. Let’s see the latest odds with a fight prediction for this upcoming UFC Las Vegas 14 headliner.

The oddsmakers are hot on Islam Makhachev, with odds of -550. Which give him an implied winning probability of 84.6% over dos Anjos. For Rafael dos Anjos as the betting underdog, you can bet $100 to win $350.

Many will know Islam Makhachev as Khabib’s training partner. The Dagestani based fighter is on a six fight winning streak. Coming in as the much younger and hungrier fighter, he also holds dos Anjos weakness – being a wrestler.

That being said, Rafael dos Anjos should never be counted out. The former lightweight champion moved up to welterweight in 2017 and started a fresh run. Picking up wins over Neil Magny and Robbie Lawler, which catapulted him into the top-five of the division.

However once faced against generally bigger wrestlers, such as Colby Covington and Kamaru Usman, RDA struggled and received back to back losses.

Similar to this fight dos Anjos was a betting underdog against Kevin Lee, where he proved the betting sites wrong with a submission win. Unfortunately, RDA is most certainly on the decline since then, losing his last two fights convincingly to Leon Edwards and Michael Chiesa.

If you are looking for betting value on this one, take a look at the betting props once they’re released. RDA is a tough opponent and will stay in the fight until the end.

A full list of this UFC fight card with updates can be found here.