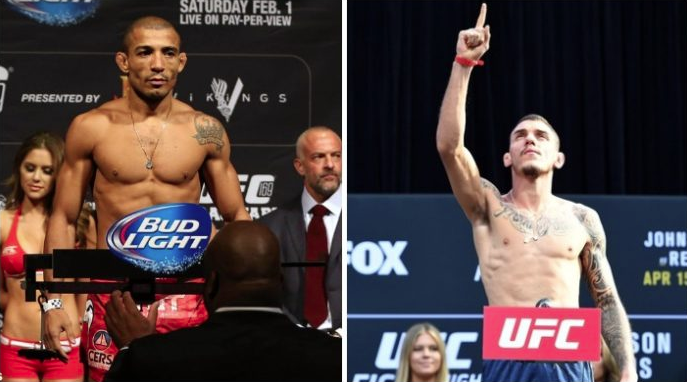 UFC Fight Night 144 takes place this Saturday in Fortaleza, Brazil. It will be headlined by Raphael Assuncao vs. Marlon Moraes, an important match-up which can be seen as a #1 contender fight for the Bantamweight title.

The co-main event is an even more enticing match-up, Jose Aldo which many regard as still the featherweight goat is currently on a one win fight streak and is looking to silence fellow Brazilian challenger Renato Moicano, who’s only loss is to Brian Ortega. It’s an old guard vs new generation type of fight, both have similar styles as explosive strikers that utilize elements of Muay Thai with Moicano more comfortable on the ground with a strong Jiu Jitsu background.

Although there is only three years between the two, Aldo has clearly more milage and his experience is vast with 31 fights under is belt compared to Moicano’s 15. Moicano is the betting favorite at (-138), which is understandable given his striking output is similar to Max Holloway; who clearly has Aldo’s card after two defeats in a row.

The fact that this will be a three round fight rather than five, will factor into Aldo’s favour due to his steadily declining cardio which has been apparent over the past two to three years.

This is honestly a fight we have went back and forth on since announced, which makes it even more exciting. Now is the time for Jose Aldo to really shine under the new ESPN deal, especially given that Max Holloway is expected to move up to Lightweight. Moicano will have to tighten up his defensive skills as he gets hit more often than Jose Aldo. According to FightMetric SApM – Significant strikes absorbed per minute, Aldo is at 2.94 and Moicano absorbs 3.45 significant strikes per minute, which could make all the difference in a three round fight.

This fight will be decided on the feet, Moicano will try use his reach to his advantage and keep Aldo at bay. Expect Aldo to make a point and really go after Moicano, by using his dynamic angles & explosiveness against a more static technical fighter.

Take advantage of Jose Aldo as an underdog, our pick Aldo by TKO/KO (+550).