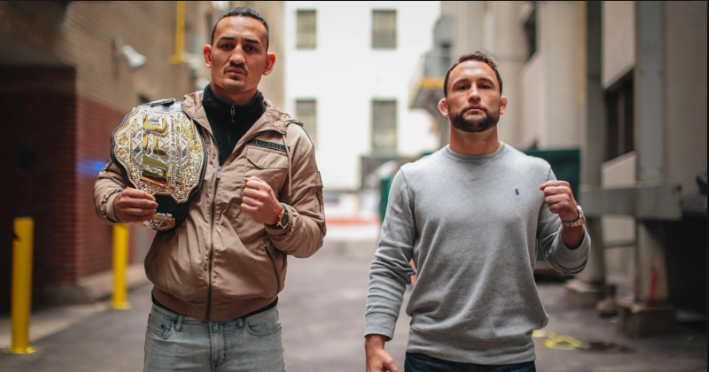 Max Holloway will return to featherweight and defend his title against #3 ranked contender Frankie Edgar at UFC 240 in Edmonton. This fight was initially booked for UFC 218 back in 2017, but the fight was scrapped after “The Answer” came down with an injury. This announcement may come as a surprise, especially Alexander Volkanovski – who defeated Jose Aldo on Saturday in Brazil and was expected to be next in line for a title shot.

Holloway (20-4), last pursued greatness with a jump up in weight to challenge for the interim lightweight title against Dustin Poirier at UFC 236. However Holloway’s power didn’t translate at 155 pounds and perhaps wasn’t prepping his body for the higher weight class for long enough. Back at featherweight Holloway is on a 13-win fight streak, with wins over Jose Aldo, Brian Ortega and Anthony Pettis.

Edgar (23-6-1), was on a two-win fight streak picking up wins over Jeremy Stephens and Yair Rodriguez prior to receiving his first UFC knockout at the hands of Brian Ortega at UFC 222. Edgar bounced back less than a month later to pick up a decision win over Cub Swanson.

Expect Holloway’s pace and boxing to keep Edgar at bay on the feet. If Edgar can deploy his wrestling we seen against Yair Rodriguez then this could change the whole dynamic of the fight. Holloway’s last fight against Poirier was bloody battle, UFC 240 takes place on July 27 – that should be enough time for Holloway to be back in fighting shape for yet another successful title defense at featherweight.

The best betting odds for Holloway vs Edgar we found were on 5Dimes.com