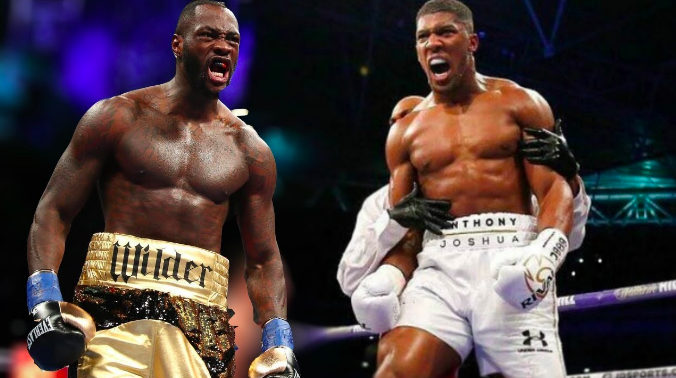 After Deontay Wilder KO’d Dominic Breazeale in the first round on May 18, the talk soon turned to what’s next for “The Bronze Bomber”. A rematch with Luis Ortiz, Tyson Fury or something different? How about Anthony Joshua, the heavyweight champ currently holds five belts and is considered by many the #1 pound-per-pound heavyweight in the world.

Anthony Joshua is scheduled to face Andy Ruiz Jr on June 1 at MSG, after that Joshua was expected to rematch Dillian Whyte – but that appears to be off the cards now. According to SkySports Joshua’s ‘main objective’ is a fight against Wilder, then we could have a huge heavyweight unification fight on our hands.

Joshua’s manager Eddie Hearn spoke to iFL TV recently: “We all know it’s a gamble for everybody; one minute AJ is the big favourite, the next minute Wilder knocks someone out and he is the big favourite. But the whole point is: Are you ready? Do you want to do it?”

“That is a fight that has become, not just the biggest fight in boxing, but one of the biggest heavyweight fights of all time.”

Hearn is right the whole heavyweight division is a gamble and that’s what makes it so exciting. Styles makes fights and on the right night any one of the top 3 heavyweights could have the other ones number.

To take advantage of these opening odds and deposit bonus a promo code will be applied by opening an account via MyBookie.ag here.

Joshua opens as the betting favorite at (-150), which means the oddmakers are giving him a 60% chance of beating Wilder. Meanwhile at (+120), Wilder has a 45.5% chance of winning. If you wagered $100 on Wilder at this opening price it would pay out $220 – that includes what you put down.

Anthony Joshua vs. Andy Ruiz Jr will be live on DAZN June 1