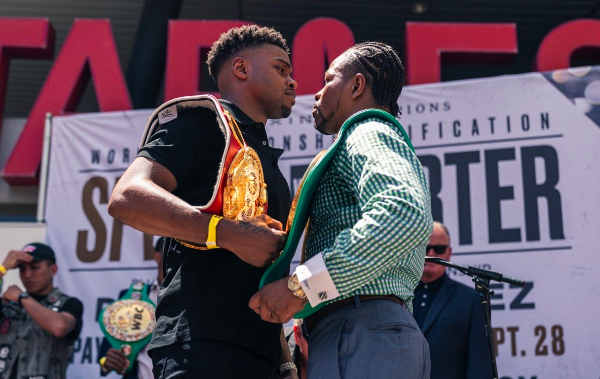 When Spence vs Porter was originally reported back in April, Betting Insider Journal noticed that Spence was a moderate favourite compare to the underdog challenger Shawn Porter. Now the betting line for Spence vs Porter has extended dramatically, with fans wagering heavily on the Errol “The Truth” Spence.

If you are wondering, how much would you win if you bet on Shawn Porter? Then a $100 bet would payout $450 in profit. Meanwhile, if you think the betting favourite will prevail – Spence’s odds mean that you would have to bet $900 to make $100.

“I know Shawn will keep this same energy on fight night,” Spence said at Tuesdays press conference. “It’s going to be an amazing moment when I get this knockout at Staples Center. This is what I’ve been waiting for. I had to be on the sidelines and watch Shawn fight Keith Thurman and Danny Garcia, but now I’m in that group. I have the opportunity to fight these top guys and make my name known.

Spence claims he wants to clear all the talent out of 147-pounds, this will be a major statement win if he can capitalize against another undefeated boxer.

The oddsmakers have a significant difference in odds and that’s exaggerated due to money being put on Spence. However, if Porter decides to bite down and trade with Spence he could get knocked out. This is the title unification fight, which we’ve wanted for a long time.