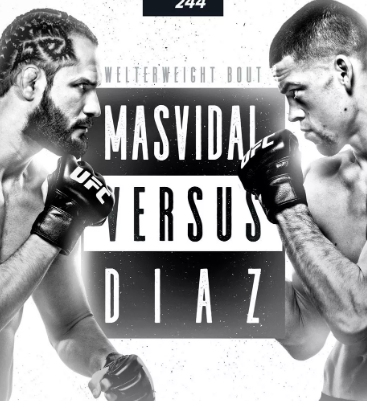 The BMF belt originally started as a fun idea, but it became a reality with Dana White backing the design of a Bad Mother Fucker belt and even Dwayne “The Rock” Johnson agreeing to place the belt around the winners waist in New York come November 2nd.

In the latest BMF title odds according to these online gambling sites, Jorge ‘Gamebred’ Masvidal remains the public betting favourite. He’ won his last two fights by way of devastating KO and seems to be on another level right now. Bet $172 on Masvidal to make $100 profit here.

Nate Diaz recently won against Anthony Pettis, this was probably the best we’ve seen Diaz look and there wasn’t any sign of ring rust due to the lengthly layoff prior. Diaz as an underdog here offers great value, bet $100 on Diaz to make $147.

Let’s see who could face the winner of Masvidal vs Diaz for the UFC BMF title.

The Notorious one has been in the headlines for all the wrong reasons as of late. Many seem to forget the meteoric rise the brash Irishman had, once a Champ Champ and has fought twice at Welterweight against none other than BMF contender Nate Diaz. This trilogy fight is always there for McGregor, whether he want’s a lightweight bout first against Dustin Poirier that will remain to be seen – but don’t be surprised if you see McGregor vs Diaz 3 sometime in 2020.

Mike ‘Platinum’ Perry has prided himself as a UFC badass, a bite down on the mouthpiece type of fighter that always brings it inside the octagon. Perry broke his nose in his last bout against Vicente Luque, did that discourage him – nope? Plus Perry is at Welterweight and it would be a perfect opportunity for his stock to rise with a high profile BMF title fight.

Darren ‘The Gorilla’ Till lost his last fight to BMF contender Jorge Masvidal. Representing Liverpool on a global scale Till has found himself robbing taxi’s while on holidays with the lads in Spain, he’s fun loving character and a contender for the BMF belt at multiple different weight classes.

Gaethje’s nickname ‘The Highlight’ says it all. He’s a talented wrestler but chooses to scrap and KO his opponents. His motto is I’m knocking them out or there knocking me out – and that’s what happens. Gaethje is back in fine form after a first-round KO of Donald Cerrone, a title shot at lightweight against Khabib or BMF glory could next for aggressive 155-pound fighter.

No BMF challenger list would be complete with Cowboy Cerrone. The UFC basically stole the BMF name from Cerrone’s famous BMF ranch that many fighters train at. Cerrone is the UFC’s poster boy for anyone – anytime and he has accumulated the most UFC fights and wins with a fan friendly style, meanwhile beer guzzling his entire way there.

1 comment on “BMF Title Odds: Who could challenge next for the new UFC belt?”