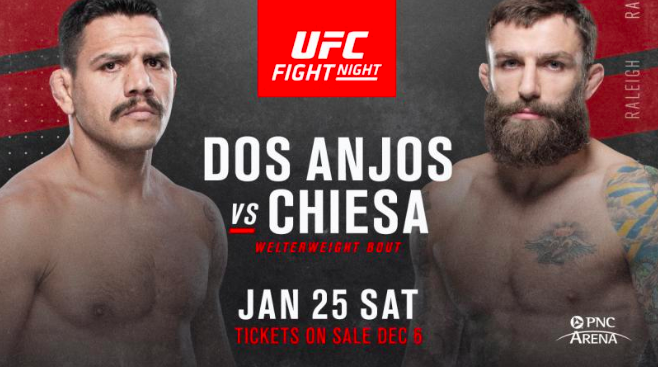 UFC Raleigh gets yet another intriguing match-up, as Rafael dos Anjos takes on Michael Chiesa at welterweight. The UFC Raleigh card will be headlined by Curtis Blaydes vs JDS with odds on that event here.

Head to head stats for Rafael dos Anjos and Michael Chiesa show us that RDA excels in the striking department where Chiesa has the advantage with takedown accuracy and defense. Stats as per UFCStats.com

Chiesa (16-4), has looked impressive since making the jump from lightweight to welterweight. After losing by submission to Kevin Lee and Anthony Pettis, Chiesa began a fresh start at welterweight. Where he is currently on a two fight winning streak with wins over Carlos Condit and Diego Sanchez.

The betting value for Chiesa at +200 is significant, especially if parlayed with another fight at UFC Raleigh. This is definitely a risky fight to bet on, with Chiesa prone to submissions and RDA being as well rounded as they come.

If one thing we have learned from RDA’s career, it’s never to count him out. His fights against Robbie Lawler and Kevin Lee proved that. Expect this fight to be closer than the oddsmakers suggest with the experience and overall tools working in dos Anjos favor.