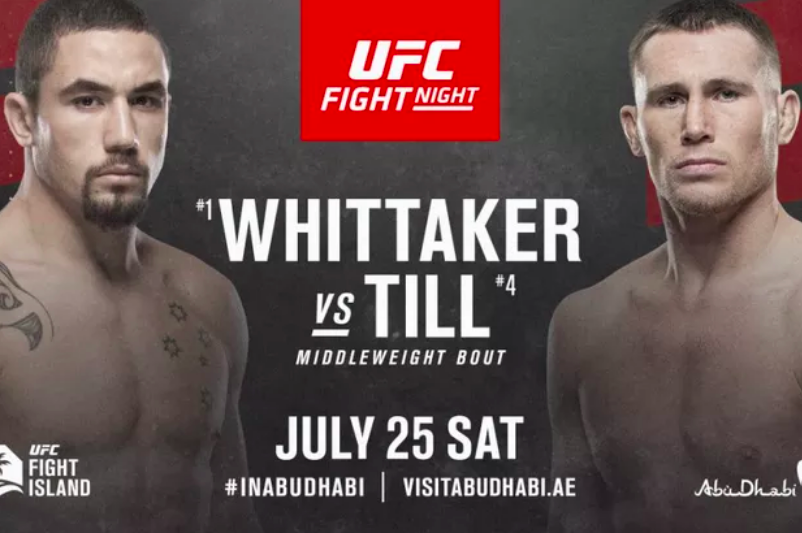 UFC’s Fight Island keeps on truckin’, next up is a fight night headlined by two elite strikers in the middleweight division. We preview the latest UFC odds for Robert Whittaker and Darren Till with a quick prediction below.

Robert Whittaker vs Darren Till Odds

Darren Till was the betting favorite here when the line first opened earlier this year. The tables have now turn and Till is an even money underdog, bet $100 to win $100 on The Scouser.

For Robert Whittaker this is his time redemption. After a lengthly layoff prior to fighting Israel Adesanya, Whittaker came in over emotional and fell right into Adesanya’s trap. That wasn’t the Bobby Knuckles we know so expect to see a more calculated and calm version of the former champ against Till.

Till Back on Form

Darren Till found himself in a trick spot after the Masvidal loss, not only had he lost in front of his home crowd in Liverpool. But that put him on a two-fight losing skid and the hype was most definitely on the decline.

Some time away from the octagon and more conditioned and controlled Till returned at UFC 244 to face Kelvin Gastelum. Till fought a safe fight and looked slick enough to win a split decision in New York that night.

Whittaker vs Till Prediction

According to UFCStats.com, Rob Whittaker has a clear advantage in significant strikes landed per minute with 4.77 compared to Till at 2.41. Till being the harder puncher but Bobby has the volume down. In terms of accuracy of their striking Till has the edge here at 46% vs Whittaker at 39%.

This fight end’s in two ways Darren Till catches Whittaker with some counter striking highlight reel finish and finishes him or Whittaker out-strikes Till and wins a majority decision. Expect a striking masterclass here that could seem cagey at times.

Bettors be ware, Rob Whittaker has certainly accumulated enough damage from the Yoel Romero wars to his most recent loss, to make any fan or bettor have a cause for concern.

According to Sportsingnews.com the former middleweight champion says he can’t wait to get back into the Octagon following his UFC 243 loss to Israel Adesanya, but admits he ‘didn’t like’ being champion. Now the pressure is off Whittaker expect him to shiner even brighter on July 25.