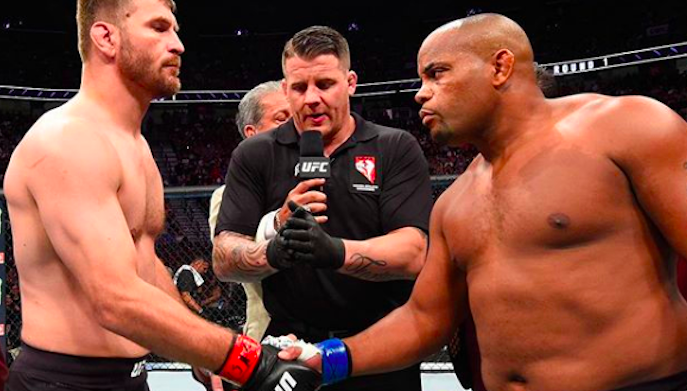 Daniel Cormier won’t be getting his red panty night with Brock Lesnar after all. Lesnar’s impending return has kept Cormier and the UFC on hold these past few months, due to his ongoing WWE obligations and suspension from a failed drug test in 2016. This would have been a huge money fight, but even in this era – it seemed a stretch to give Lesnar a title shot after his last win was in 2010 over Shane Carwin. Dana White has now conformed that Brock Lesnar is indeed retired.

In July 2018, Daniel Cormier moved up to in weight class to challenge the Cleveland champ, knocking him out in the first-round and becoming the new UFC double champ. Cormier then relinquished the lightweight title and remained at heavyweight, where he defended the belt against Derick Lewis at UFC 220 in New York last November.

The opening odds here are similar to their first bout, as Cormier was a (-140) favorite and Stipe was (-170), the line here seems closer than their first bout. This could be due to father time finally catching up with Daniel Cormier, however knowing how vocal Stipe has been during his lay-off emotions should be kept outside of the Octagon or this could be another short night for him.