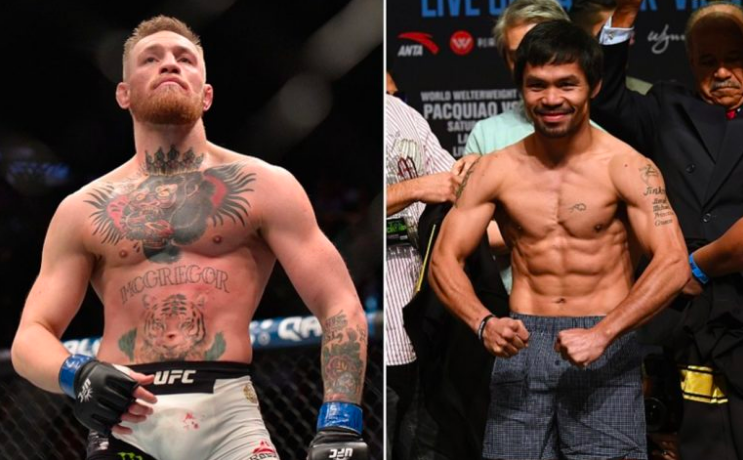 Conor McGregor is eyeing up another challange inside the boxing ring. This time the Irishman has been connected with Manny Pacquiao, in a possible Zuffa boxing crossover bout. We preview the opening odds for McGregor vs Pacquiao with some early fight analysis.

For this opening betting line between Manny Pacquiao and Conor McGregor, the Filipino boxer is a sizeable betting favorite. In terms of winning probabilities Manny has a 90% chance of defeating Conor McGregor. For The Irishman who is yet to pick up a pro-boxing win, he is a big underdog – bet $100 to win $900.

Conor McGregor has done a great job on making a dream become reality. With the rumours of a Manny Pacquiao there does seem to be some truth to it. Dana White is currently in negotiations with Zuffa to make Zuffa Boxing become a reality, late last year Dana and Floyd Mayweather began talks to work together.

In a recent interview McGregor said “With Manny Pacquiao, talks have been ongoing… An aspiration of mine is to win a boxing world title. It would be a phenomenal feather in the cap and is something I will achieve.”

Before McGregor’s comments, Kevin Iole, the boxing and MMA reporter at Yahoo Sports, posted a mock fight poster of McGregor and Pacquiao on Twitter.

Is age Catching up with Manny Pacquiao?

Manny Pacquiao is certainly in the twilight of his career, but it’s an impressive return to form for the former champ. 2019 was an incredible year with wins over Adrien Broner and Keith Thurman. Proving to us all he’s still got it and really is one of the best welterweights of all time.

Pacquiao will turn 42 this year, while McGregor is 31 and that’s quite the age gap. At the end of the day Pacquiao is known for his speed and sheer toughness both of which still be there once him and McGregor meet within the next 1-2 years.

This potential of this blockbuster fight between PacMan and Notorious is rumoured to be at the new Allegiant Stadium in Las Vegas.

Who is the betting favorite between Manny Pacquiao and Conor McGregor?

Manny Pacquiao is the clear betting favorite against Conor McGregor.

Where can I bet on Manny Pacquiao and Conor McGregor?