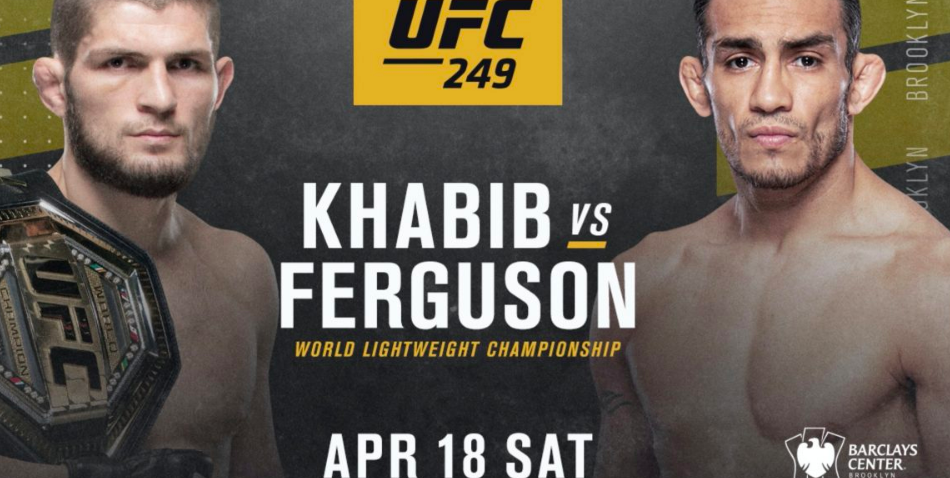 UFC 249 goes down on April 18, easily one of the most anticipated bouts in UFC history. Between two vicious lightweights that are both on a tear in the division. Below we take a look at the latest odds for UFC 249 and see where the betting value lyes for Khabib vs Ferguson.

How to bet on Khabib vs Ferguson?

At Betting Insider Journal, we have compiled a list of online sports betting sites here. Take a browse and see which one suits you.

Tony “El Cucuy” got his name from a mythical ghost monster. A bit like his fighting style, no matter you throw at him he keeps marching forward. His key weapons are his impressive gas tank that helps him keep continuous pressure throughout the fight.

Tony has incredible fight IQ from weird and wonderful rolls, if he his hurt to help himself recover to unorthodox striking unlike any other UFC fighter. He can fight off his back with razor sharp elbows which seems like a perfect defense for a fighter like Khabib.

The odds favor Khabib for a reason

Khabib has emerged as one of the dominant figures in the UFC. For the sheer way he controls a fight and makes his opponents look less than average, is a clear sign of his greatness. On the feet he has improved but by no means do we expect Khabib to stand and trade with a Tony.

The style that Tony brings usually involves getting in close and whipping elbows at his opponents, this is where Khabib can latch onto him and take him down.

Khabib has been a firm UFC betting favorite since his third UFC bout onwards. Going as far as -850 against Darrell Horcher at UFC on Fox 16. Khabib is favored in the McGregor rematch if that happens and also heavily favored against George St. Pierre in their futures odds.

Will Conor McGregor be a late replacement?

According to essentiallysports.com On being asked about whether Conor will Show up in Brooklyn for UFC-249 (Khabib Nurmagomedov vs. Tony Ferguson), Dana replied, “No, he’s not gonna be there. Conor’s ready to slide into that slide. Conor fought at 170 and fought at the beginning of the year because he wanted to be able to cut and make weight if one of those two (Tony or Khabib) fall out.