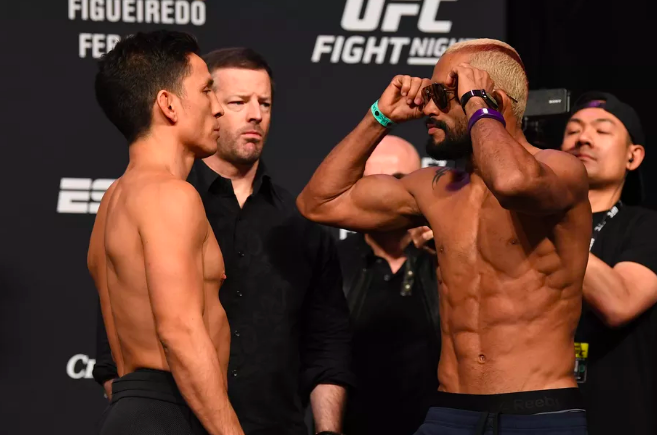 A fourth title bout has been added to UFC Fight Island, with a rematch added for the flyweight title. Benavidez will take on Figueiredo once again on July 25 in Abu Dhabi.

Figueiredo being the betting favorite means he has an average 68% implied probabilbity of defeating Benavidez a second time. For Benavidez as the underdog you can bet $100 to win $185.

What to Expect From The Rematch

In their first encounter at UFC Norfolk, Benavidez started off strong. However, as the first progressed and an accidental headbutt caused Benavidez to lose his composure, Figueiredo capitalized by knocking him out in the second round.

According to MMAFighting “Benavidez said that Figueiredo missing weight played a big factor in the bout, as did a head butt that the referee didn’t see. That, he said, essentially ended the fight for him.”

We believe Benavidez can get the job done in the rematch, but he will have to remain more focused and not be drawn into Figueiredo’s game too much. Figueiredo on the other hand is the deserved betting favorite, he’s a durable fighter with a well-rounded game of KO and submission ability.

Wha Benavidez is lacking is the development of his footwork since his early UFC bout’s. Instead of stick and move he can remain stationary at times and leaves himself open for another KO loss in the rematch.

Figueiredo vs Benavidez 2 will be the final event held on UFC’s Fight Island in Abu Dhabi. The first of which will be UFC 251 with odds & predictions on that covered here.

Then Robert Whittaker will take on Darren Till in some what see as a #1 contender fight, (Paulo Costa may beg to differ).