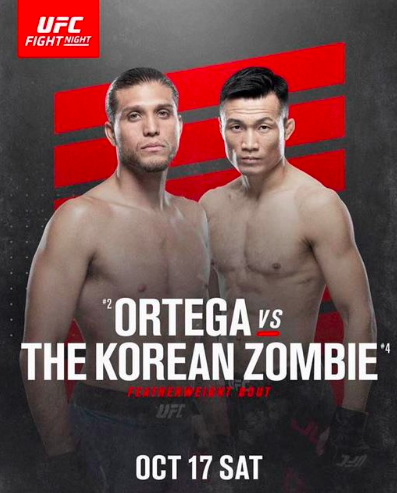 The stakes will be high at UFC Fight Island 6, as Dana White has confirmed the winner will get a title shot at featherweight against Alexander Volkanovski. So without further delay, let’s get straight to the UFC odds for Ortega vs Jung!

When this fight was first announced late last summer, Ortega was a slight underdog. Now the betting line has increased for “T-City” as a +150 underdog, you can bet $100 to win $150 on Ortega.

Prediction for Ortega vs Korean Zombie

Brian Ortega (14-1)(1-NC), hasn’t fought since 2018, when he lost to Max Holloway by TKO in the fourth round. That was a fight where Ortega looked out of his depth and was outclassed by a prime Max Holloway. Prior to that Ortega looked fantastic, with a first round KO over Frankie Edgar and submission wins over Cub Swanson and Renato Moicano.

The Korean Zombie (16-5), fought Jose Aldo for the featherweight strap back in 2013 but lost via fifth-round TKO. Since then, Jung has gone on to earn stoppage wins over the likes of Renato Moicano and Frankie Edgar.

The Korean Zombie is an elite fighter and if it wasn’t being sidelined for two years due to military duties, he could of become UFC champion. However, the ceiling still remains high for Jung and is a deserved contender for another shot at UFC gold.

In terms of what stats to know, Jung will have a 3 inch reach advantage over Ortega. Jung will also hold a striking accuracy advantage of 41% compared to Ortega at 33%. Ortega’s defence was totally diminished against Holloway, which I’m sure he has been improving on during the down-time.

If Ortega wants to end this fight within the distance his best opportunity would be to play to his strengths on BJJ. 50% of his wins of come by submission and he averages 1.4 submission attempts per 15 minutes.

Jung has the clear advantage heading into this fight. His more recent octagon time and ability to match Ortega’s striking and submission defence should be enough. Once the betting props are released it may be worthwhile looking at Jung insider the distance.

According to Dana White “Yes, I think so,” said the UFC boss to Sports Illustrated. “First, this kid (The Korean Zombie) has superstar written all over him. He was called into the military in the prime of his career in South Korea. Then he gets out and has that incredible fight with Yair Rodriguez. He gets caught with one second left with that crazy elbow. He’s battled a couple injuries and had some bad luck along the way, but this is a big fight with Ortega.

1 comment on “UFC Odds & Predictions for Ortega vs Korean Zombie”