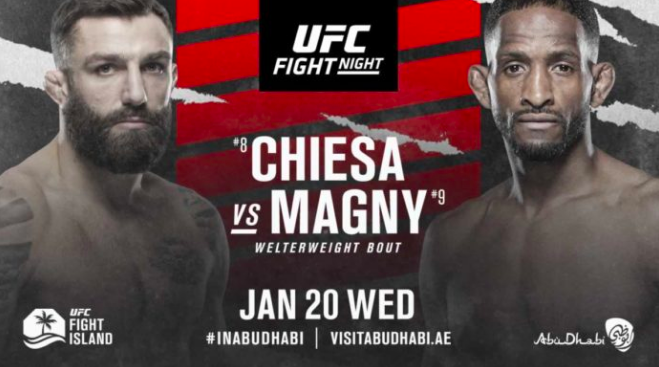 UFC Fight Island’s second event of the January triple header is headlined by Chiesa vs. Magny. The two welterweights will step inside the octagon on Jan 20. We preview the odds for Michael Chiesa vs Neil Magny with predictions below.

Oddsmakers are giving Neil Magny the slight edge, a $138 bet would ensure profits of $100. While betting on Michael Chiesa as the underdog, means you can bet $100 to win $105.

This is a good fight to bet on if you want to make some money. Since the betting odds are so close, you make decent profits betting on Michael Chiesa or Neil Magny.

Personally, I think this is a great fight. Both fighters match-up well all large frame welterweights. Michael Chiesa is 17-4, with his last three wins over Carlos Condit, Diego Sanchez, and Rafael dos Sanchez.

He has eleven submission wins and six decisions under his belt. Neil Magby is 24-7, he has seven KO wins, three submissions and fourteen decision wins over the course of his 31 fights.

Both fighters are on a three-win fight streak and have lot’s to gain and lose from this bout. Looking at both of their past performances, Chiesa dominated RDA, and Magny outwrestled by putting on a clinic over former champ Robbie Lawler.

Skill-wise Chiesa and Magny have incredible ground games. We saw Magny lose to Damien Maia but since then he’s improved and should be able to handle Chiesa if this fight goes to the ground.

In terms when it comes to striking I would give the edge to Magny, although Chiesa isn’t far behind on striking either. We saw Chiesa dominant Diego Sanchez, but I don’t see him having the same success with that approach against Magny.

Overall I give the edge to Chiesa on the ground, and Magny if it stays on the feet. The outcome of the fight will depend on these factors. One x-factor that we see Magny having over Chiesa is his output and cardio. For that reason, I’m picking Neil Magny as a slight favorite to defeat Michael Chiesa at UFC Fight Island 8.

For all the latest MMA news, odds & predictions check out our MMA section here. Who do you think will win, Chiesa or Magny? Comment below!