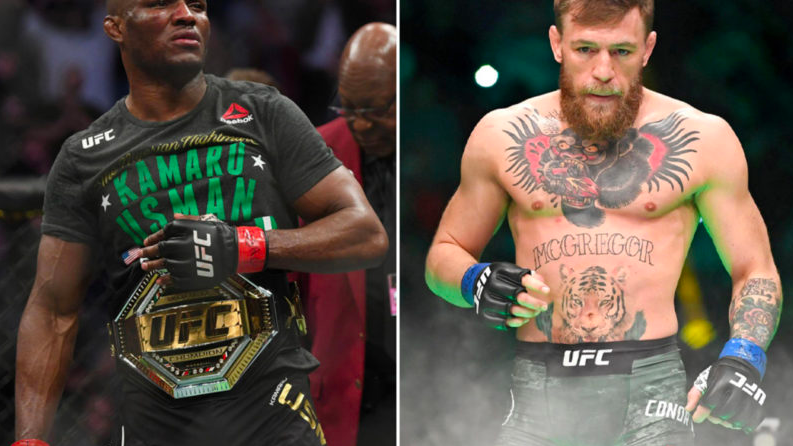 Usman’s manager made it clear that if Jorge Masvidal doesn’t fight Usman next, then The Irishman will be gifted the next title shot at Welterweight.

Update: Odds have been released for Usman vs Burns here.

With that, online sportsbooks have released opening UFC odds for Conor McGregor vs. Kamaru Usman.

The oddsmakers are giving Conor McGregor a 41.6% winning probability over defeating Kamaru Usman. In terms of betting, you can bet $100 on McGregor to profit $140 if successful.

Kamaru Usman is the dominant betting favorite across all betting sites over McGregor. That means you’d need to wager a higher amount to net some extra cash. Bet $260 to win $100 on Usman defeating McGregor, be sure to check out our list of verified sportsbooks for all the odds.

Is Usman a Mismatch for McGregor?

It’s no surprise that Conor McGregor is the betting underdog against Kamaru Usman. McGregor isn’t a wrestler and prefers to stand and trade. Now we seen Usman stand and trade with another elite wrestler Colby Covington, and that showed us Usman’s heart but how hittable he is on the feet.

When it comes to sheer size Usman is the bigger and more well-rounded athlete. We’ve already seen McGregor’s power slightly diminished at 170 pounds. But, who’s to say he can’t come out of the blocks like he did against Cowboy and stun Usman.

It will be interesting to see what the betting props are for McGregor by 1st or 2nd round KO over Usman, if the fight eventually get’s confirmed.

Who will Conor McGregor face next?

If The Kamaru Usman bout doesn’t transpire, the former double champ is becoming more limited with opponents as they are all getting booked up. The real money fight is a trilogy fight with Nate Diaz or a fight for the ages against Jorge Masvidal.

Diaz and Masvidal are actually both rumoured to be in angling for a BMF rematch, which could be on the cards for this summer.

At lightweight you have Justin Gaethje waiting for the return of Khabib Nurmagomedov for the lightweight title. Gaethje had the possibility of fighting McGregor but opted for a title fight over money against Mystic Mac, which is honourable in these days of MMA.

That leaves some of the big dogs out of the picture, for now. Personally I’d love to see a rematch against Dustin Poirier. That’s if Poirier can come out unscaved against Dan Hooker in his upcoming bout on June 27.