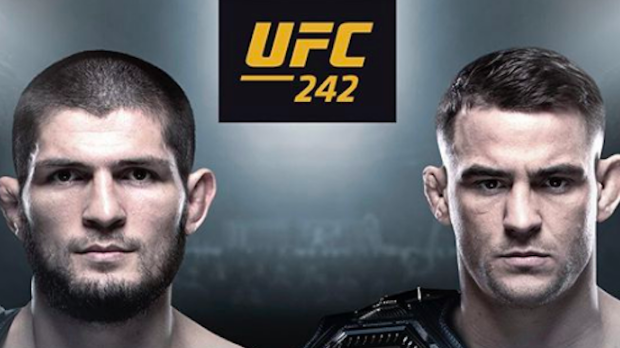 UFC 242 get’s under way this upcoming weekend, at The Arena, Yas Island in Abu Dhabi, United Arab Emirates.  The betting odds for Poirier vs Khabib offer a significantly large gap for the probability of winning, with Khabib being so dominant throughout is MMA career this is understandable.

If you like taking a chance with underdogs in UFC bout’s then Dustin Poirier offers incredible value here. Bet $100 to profit $320 on Poirier, while Nurmagomedov being the betting favourite means you’d need to wager $385 to make $100 in profit. All UFC 242 odds courtesy of BetOnline.

Nurmagomedov (27-0), returns to the Octagon after his highly profiled win over Conor McGregor back in October 2018. Nurmagomedov’s chain wrestling style has nullified every competitor along the way. In his bouts against McGregor and even Al Iaquinta we seen elements of his striking improved also. However, against a slick boxer like Poirier – Nurmagomedov will not want to stand and trade, as this would be his downfall.

Poirier (25-5-1), has been in the UFC since 2011 with an impressive fight resume and wins over the elite at lightweight he has proven he has the skills and heart to overcome adversity on the worlds stage. Poirier may not have the kryptonite to stop Khabib but who has realistically? Well perhaps that will be Tony Ferguson – who Khabib already stated that deserves the next title shot.

In the co-main event Paul Felder will take on Edson Barboza, check out the latest betting odds for Felder vs Barboza here.