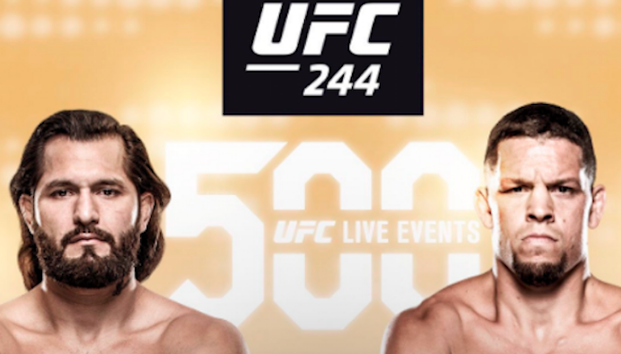 Fight week is upon us with UFC 244 going down at Madison Square Garden in New York City, Nov 2. The much anticipated ‘BMF’ belt will be on the line with the of two baddest mother fu#*ker in the game Jorge Masvidal and Nate Diaz throwing down at MSG.

Our most recommended betting site this week is BetOnline, they have released an array of UFC betting props in their MMA Props section of the site for UFC 244.

Will President Trump Attend with Any of His Sons?

Odds on First Fighter to bleed

At (+140) chances are Nate Diaz will bleed with all the existing scar tissue, we’ve seen him be opened up in multiple UFC fights.

Odds on Trump shown or announced will fans boo?

Chances are yes Donald Trump will be shown at some stage during the event, and the crowd will continue to Boo The President as they did earlier this week.

The respect between Diaz and Masvidal is strong, however on the grand stage for pure entertainment value Diaz probably will attempt a Stockton Slap on Gamebred.

Historically Nate Diaz has always had a positive relationship with Jeff Novitzky aka The Golden Snitch. Last week though there was some turbulence between Diaz and the origination – that seems to be settled for now though.