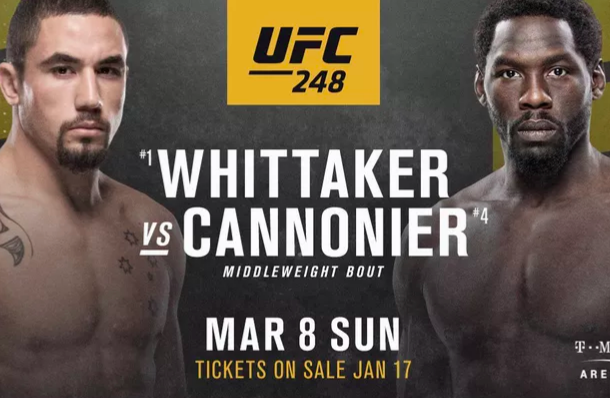 UFC 248 just got another major fight announcement. The Las Vegas based card is already headlined by Joanna Jedrzejczyk and Weili Zhang for the strawweight title. Now Robert Whittaker and Jared Cannonier are expected to feature as co-main. We preview the opening betting odds for this high stakes middleweight.

Jared Cannonier moved up to middleweight in 2018, since then has been an impressive run. His power has translated well, picking up TKO wins over David Branch, Anderson Silva and a performance of the night win over Jack Hermansson.

Bobby Kunckles Favoured to Bounce Back

Yes this is a dangerous fight for Whittaker to take, after just losing the strap. Many forget that bobby knuckles is the man to beat Yoel Romeo not once but twice, albeit some controversial on some judges cards.

Given his emotional performance against Israel Adesanya, this will be a massive learning curve for the former champ. Whittaker will have to use this angles and mix up his striking to keep Cannonier at bay.