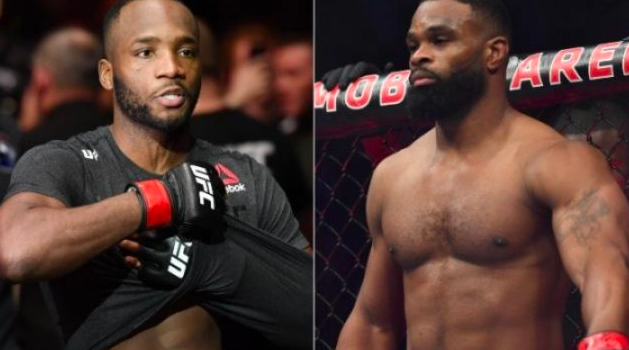 Tyron Woodley’s return has been set for UFC London, the former 170-pound champ is scheduled to face Leon Edwards on March 21, 2020. We take a look at the opening odds for Woodley vs Edwards with some earlier fight analysis.

Leon Edwards is a slight betting favorite in the opening fight odds for UFC London. Bet $147 on Edwards to make $100. For Woodley a $100 bet would profit $115. This is the second time “The Chosen One” has been the underdog recently, at UFC 228, Woodley was underdog to challenger Darren Till.

We have all the best online sportsbooks reviewed here, for all your UFC betting needs.

According to UFC stats Woodley has 92% takedown defense compared to Edwards 70%, this could vital if T-Wood wants to keep this fight on the feet. Edwards has the slight advantage in the strikes landed per minute, with 2.53 compare to Woodley’s 2.50. Whereas the overall power is obviously lying in Woodley’s hands with immense hand speed too.

Edwards has been quietly on a tear at welterweight, picking up wins over Vicente Luque, Gunnar Nelson and Rafael dos Anjos to name a few. His last UFC loss was to the current champion Kamaru Usman back in 2015 – you can be guaranteed if Edwards wins they’ll run that one back. In his home country this could be Edward’s time to get the home crowd behind him and become England’s next UFC star.

Woodley as an Underdog

Being overlooked by the oddsmakers and bettors alike is a common theme for Woodley. He was an underdog against Robbie Lawler, Stephen Thompson (twice) and also Darren Till as mentioned above. It’s when he get’s too comfortable that he doesn’t perform, as we seen against Usman. Going into enemy territory with an extra chip should mean we are in for a real battle at UFC London.