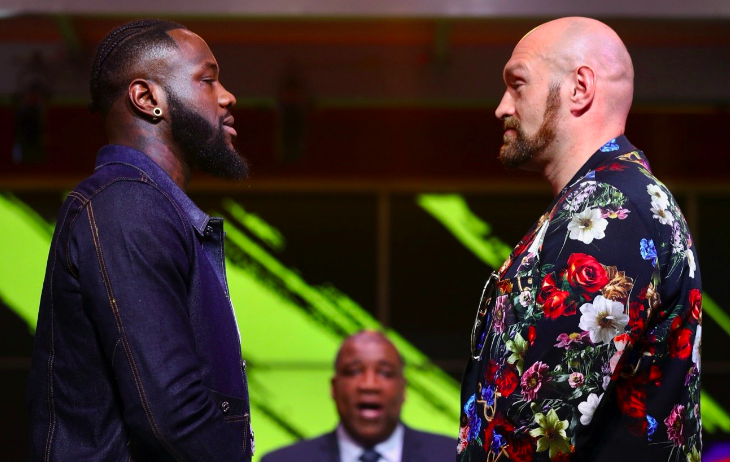 Tyson Fury and Deontay Wilder will go toe to toe for the second time Saturday, Feb. 22 at the MGM Grand, Las Vegas.

Fireworks are expected as the two top heavyweight boxers are stylistically different with Wilder being the big puncher, and Fury being one of the most fluid boxers in heavyweight history.

In the latest Fury vs Wilder odds the tables have turned with Wilder now being the betting favorite. “The Bronze Bomber” now has a 54.1% winning probability over “The Gypsy King”. You can bet $118 to win $100 on Wilder. For Tyson Fury being the underdog is what many betting fans want to hear, bet $100 to win $100 on Fury with this even money bet.

Fury (29-0-1, 20 KOs) has been on a long road back to fighting the elite of boxing. From defeating the then-undisputed champion Wladimir Klitschko back 2015. Fury abandoned boxing for two years and almost his own life, battling is demons and then rising above them to become the brash Gyspy King once again.

Fury took two lesser-known yet challenging and undefeated opponents after the first Wilder fight. Known as a boxer who fights to the level of his opponents. There is something to take away from difficulties of the Otto Wallin fight. Fury fought on the inside, similar to his earlier career performances and smothered Wallin. This tactic could be employed against Wilder like when he used his size and weight to his advantage against Klitschko.

Unlike the first bout where Fury used his jab and moved. His camp realize that it’s not worth the risk going twelve rounds with a killer puncher like Wilder. Fury has switched camps and is now training under Javan SugarHill, who are training him to sit on his punches to generate more power.

“Expect Fury to fight on the inside and smother Wilder’s punches this time.”

Fury’s new camp seem to be ticking all the right boxes. With nutritionist George Lockhart on board to keep Fury’s diet on track. Former Irish champion Andy Lee will also bring his boxing knowledge, where he focused on Fury’s weaknesses instead of his strengths this time.

“His Jab has improved and now it’s a weapon.”

It would be a shock if Fury knocks out Wilder, but a stoppage could certainly be on the cards. Especially if Wilder has no answer for Fury’s dirty boxing. If Fury can switch up his style from round to round, it could make for an extremely frustrating night for Deontay Wilder.

Expect Fury to put the pressure on early and cause Wilder to open up and make mistakes. Fury will capitalize on this, if he doesn’t secure a stoppage win – he will win by a large margin on points.

If you are looking for some Wilder vs Fury 2 Odds: The Best Round Betting Options are listed here prior to the big night on Saturday.

Fighter Predictions for Fury vs Wilder 2

Wilder W 12: “I like Deontay Wilder to win, possibly by knockout, but, in truth, I don’t see either guy being knocked out. I think that Wilder not only has that powerful right hand, but that he has improved in his ability to set it up.

“On the other hand, I know that Tyson Fury has excellent boxing abilities and a tremendous chin from the way that he got up from the two knockdowns in their previous fight. In the end, I think that Wilder is always in shape and that he will use his speed and power to get the job done.”

Fury by Majority Decision: “If Fury can box the same way he boxed in the first fight, without any scares, he can pull it off. On the flip side, it’s hard to pick against Wilder, as he always looks more impressive in rematches.”

Wilder KO 10: “Never bet against a puncher, particularly one like Deontay Wilder. I look at Wilder like I do at a Mike Tyson, another puncher. I see Wilder winning this rematch with Tyson Fury by 10th-round knockout.”

Fury: “I think it’s a very difficult fight to call. Fury won the last one by a mile, but I think Wilder will be more aggressive this time, which may play into Fury’s hands. Wilder can win by KO at any moment, but put a gun to my head, and I’d say Fury on points.”

Wilder: “Deontay Wilder can box and win, but I think that his power will be the difference in defeating Tyson Fury. I believe that it will go to a decision again, but with Deontay Wilder winning it.”

Fury by decision: “I Fury is the better boxer and smart enough to make the adjustments needed from the last fight. If he can avoid a bomb from the ‘The Bronze Bomber,’ I think he will win on the scorecards.”

Wilder: “I’m picking Deontay Wilder based on his confidence and the fact that he does all of the right things to remain in great shape, and that he’s committed to his craft.

“Wilder’s not just a big guy with a right hand, but he’s also become more calculated in his approach. That’s why I’m picking him to win this second fight against Tyson Fury.”