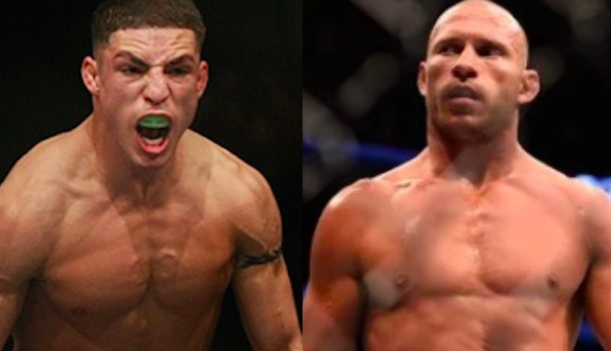 UFC veteran Diego Sanchez has his last fight coming up against Donald “Cowboy” Cerrone. Sanchez featured in the first-ever Ultimate Fighter season one, and since then has fought thirty times in the UFC. We analyze the odds for Cowboy vs Sanchez on May 8th.

Donald Cerrone opens as the firm betting favorite at -549. That’s an implied win probability of 84% for “Cowboy” defeating Cerrone. If you are looking to bet on “Cowboy” it might best to wait until the betting props for KO/TKO odds are released.

If you think Diego “The Nightmare” Sanchez has a chance of beating Cerrone, then you can bet $100 to win $350 with these current odds. For all the latest UFC betting sites, visit our sportsbook review section here.

As Sanchez described this a “New Mexico fight” between two fighters on either side of the valley. Sanchez has the longest-active UFC career and wanted a household name for his last fight.

“So I’m super excited for this ‘Cowboy’ fight, and I’m motivated as hell. I want to go out there and kick his ass. I want to take it to him, I want to bring the fight to him. When you’re training for your retirement fight, you just take sh*t more seriously because you know this is going be your last time that you make the walk.”

Between “Cowboy” and Sanchez they accumulated 94 fights. “Cowboy” still holds the record with the most knockout wins and most UFC fights.

Cerrone hasn’t won a fight since he defeated Al Iaquinta in 2019. However, he has fought the tough caliber opponents and came up short on multiple occasions including his last fight against Niko Price and a close loss to Anthony Pettis.

At 38 years of age Cerrone has cemented his spot as a UFC great. An “anytime, anywhere” type of fight, which might not be the smartest career-wise, but has won himself a loyal fanbase.

Sanchez on the other hand has been knocking around since TUF season 1, with highlights here of his hilarious highlight moments. His personality would fit in perfectly with WWE, with unorthodox trainers and crazy call-outs. That all being said, he’s proven last into his career, he can still hand with new up-and-comers, such as Mickey Gall.

Want to know the latest MMA odds and news from UFC to Bellator, then check out our MMA section here.