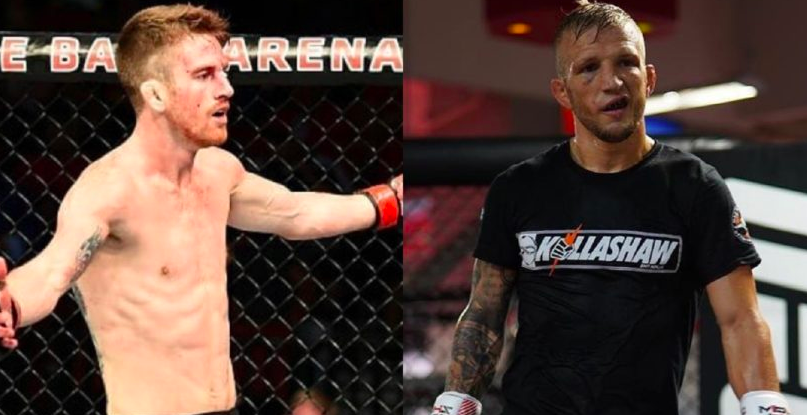 On May 18th, former bantamweight champion T.J. Dillashaw will return to action. Headlining UFC Fight Night: Sandhagen vs. Dillashaw. We review the opening odds with some pre-fight analysis below.

When the opening betting odds for Sandhagen and Dillashaw were released they have even odds of -110. After the betting public got their hands on the early lines, they favored betting on Sandhagen over Dillashaw.

I expect these latest odds to sway even further as bettors lay money on their favorite pick, with the long layoff expect Dillashaw to be a sizeable underdog come fight night.

It’s been a long time since we have seen T.J. Dillashaw in action. At one point Dillashaw was regarded as one of the greatest bantamweights. He defeated Cody Garbrandt to win the title, then defended it against Garbrandt, winning by TKO in the first round.

Dillashaw, who is now 35, recently completed a two-year U.S. Anti-Doping Agency suspension stemming from a positive drug test for EPO in January 2019 – the testing timeframe of his first-round TKO loss in a flyweight title challenge against then-champion Henry Cejudo.

Expect Dillashaw’s extreme competitiveness to still be there and he will be looking to make a statement against Sandhagen, to get the attention of the bantamweight division.

Sandhagen is coming off a “Knockout of the Year” candidate with a brutal flying knee knockout of Frankie Edgar in February. That put him on a two-fight win streak, after suffering his first UFC loss to Aljamain Sterling at UFC 250.

The “Sandman” has shown high fight level IQ over the years and resilience after the loss to Sterling. If he can get past Dillashaw then expect the Sandman to get a well-deserved title shot.

With the addition, the UFC’s May 8 lineup now includes:

Now that we know the oddsmakers were orginally calling this a 50/50 fight. Who would you give the edge to, comment below!