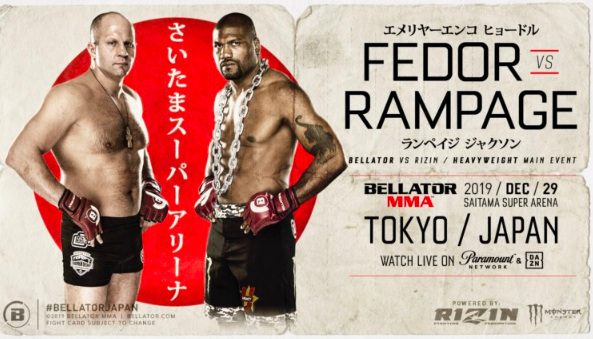 Bellator MMA is going to Japan with a nostalgic fight for the fans. They are joining forces with Rizin FF to launch a throw-back New Years eve event just like the early days of MMA. We preview the opening betting odds for Fedor vs Rampage which is set to headline Bellator x Rizin.

‘The Last Emperor’ is on a retirement tour, it’s almost like the Undertaker showing up at Wrestlemania. To make any profit on Fedor defeating Jackson, you would have to wager $138 to make $100 in profit. Rampage has also declined a tone since his UFC days, he is a (+105) underdog, bet $100 on Rampage to win $105 from these select list of safe betting sites here.

Emelianenko (38-6, 1 NC) is the former Pride heavyweight champion and regarded as the best fighter of the early 2000s, holding a 10-year undefeated streak from 2000 to 2010. Fedor’s was on a two-win fight streak defeating Frank Mir and Chael Sonnen in Bellator’s Heavyweight Grand Prix, but lost in the final to Ryan Bader.

Jackson (38-13), once held the UFC light heavyweight title back in 2007. He was famous for his wins over Chuck Liddell and rivalries with Wanderlei Silva and Rashad Evans. Rampage was on a two-fight losing skid until his most recent win a 2nd-round TKO of Wanderlei Silva in 2018.

“For Bellator’s debut in Japan, we wanted to bring a massive event and fighters that the Japanese fans really connect with,” Coker said in an accompanying press release. “Given the vast history of martial arts and MMA in Japan, and especially at Saitama Super Arena, this will be a very special show that no one will want to miss. This will, unquestionably, be a monumental event for Bellator and I am looking forward to the moment that Fedor and ‘Rampage’ walk out to a crowd that has known them since their careers began.

“I would also like to thank RIZIN for their help in making this event a possibility and we look forward to working together in the near future to showcase the best talent each organization has to offer.”

Check out one of the most formal press-conferences in modern MMA history below for Bellator x Rizn.