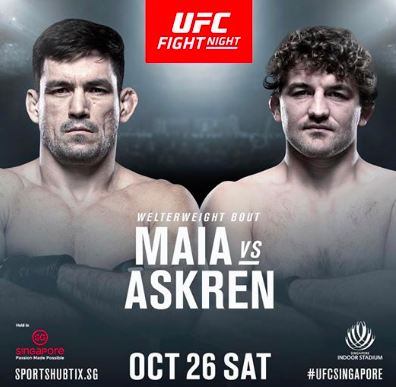 UFC Signapore takes place Sat., October 26 with Demian Maia set to face Ben Askren. This bout will headline UFC Fight Night 162, it will be a real challange for both men to determine who is the best grappler at Welterweight.

The opening betting line between Askren and Maia has been released. For a $145 stake on Askren you could profit an extra $100. Meanwhile if Maia can successfully null Askren’s wrestling you could gain $115 from a $100 wager.

Askren (19-1, 1NC), is still looking to stamp his mark on the UFC. He was undefeated until earlier this year when Jorge Masvidal sent him into orbit with a record breaking fast flying knee. Prior to that Askren struggled against Robbie Lawler, but still managed to pick up a controversial win.

Maia (27-9), is back in the win-column again with two back to back wins in the UFC’s 170 pound division. The Brazilian grappler will turn 42 this year, yet still is consider one of the best grapplers in the game.

Askren is also a fan of the new BMF belt which could see a potential rematch against Jorge Masvidal down the line: “That would be really nice,” Askren said about a rematch. “Again, we’ll see where the division goes and where I’ll be, but I hope so.”

This is a safe fight for Askren compared to his first two UFC bouts. The fans will get to see his wrestling skills be displayed in full for us. Expect the odds to shift over the coming weeks as fans are divided who be crowned the best grappler at 170 pounds.