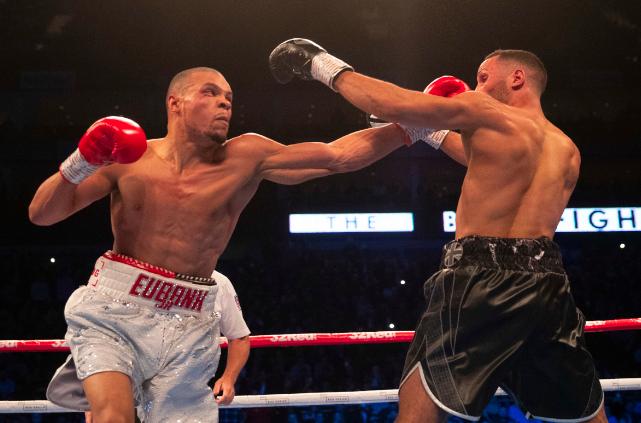 On the same day as Anthony Joshua vs Andy Ruiz Jr rematch on the opposite side of the world another British fighter Chris Eubank Jr will make his US debut against Matt Korobov. We preview the boxing odds between Eubank Jr and Korobov to see where the value is.

Eubank Jr looked back on form in his last bout against James DeGale, with only two losses on his fight resume to elite boxers in Billy Joe Saunders and George Groves, Eubank has had time to mature as a fighter and now is his time to shine on US soil. Bet $200 on Eubank as a favourite here to make a profit of $100.

Check out our review of the best boxing sites here.

Chris Eubank Jr has this to say: “I’m excited to come down to 160lbs where I naturally belong, and I don’t see anybody being able to touch me at this weight class. America is where I learned how to fight as an amateur in Las Vegas and 13 years later I’m finally going to make my US professional debut. I can’t wait to show the fans in the US that I’m the best middleweight in the world.”

Standing in Eubank’s way to make an impression on the US audience is Russian boxer Matt Korobov. Similar to Eubank, Korobov has only two professional losses and they came from Andy Lee by TKO and a UD loss to headliner of the event Jermall Charlo.

As far as boxing fights goes this could go to the decision and it should be close, we give the edge to Eubank with Korobov losing momentum coming off a decision draw to  Immanuwel Aleem.

In the main event the one half of the Charlo brothers Jermall will put his undefeated record on the line against Dennis Hogan. We preview the betting odds between Charlo and Hogan below.

Charlo is a huge favourite here, so unless you are willing to risk large amounts it’s not worth the squeeze here. Bet $1200 on Charlo to make $100 profit here. Meanwhile we like Hogan’s odds here at 11/2, if you bet $100 you could make $550 in profit.

“Obviously, I want the big fights,” Charlo said. “I’m not looking past Dennis Hogan, but it’s time to unify. It’s time to prove myself. Me and my team will get together and make it happen. Those guys can’t hide behind their network forever.”

Charlo was the mandatory challenger for Alvarez’s WBC middleweight title. The Mexican icon instead moved up to light heavyweight, the division within which he’ll challenge WBO 175-pound champion Sergey Kovalev  If Charlo can defeat Hogan and Canelo can get past the “Krusher” Kovalev on Saturday night surely they will line these two up for a fight.

Dennis Hogan has a record of (28-2-1, 7 KOs), he was on a six-fight winning streak until is controversial loss to boxing star Jaime Munguia. This will another huge test for Hogan, the odds are certainly against him but he can certainly test Charlo in the ring.