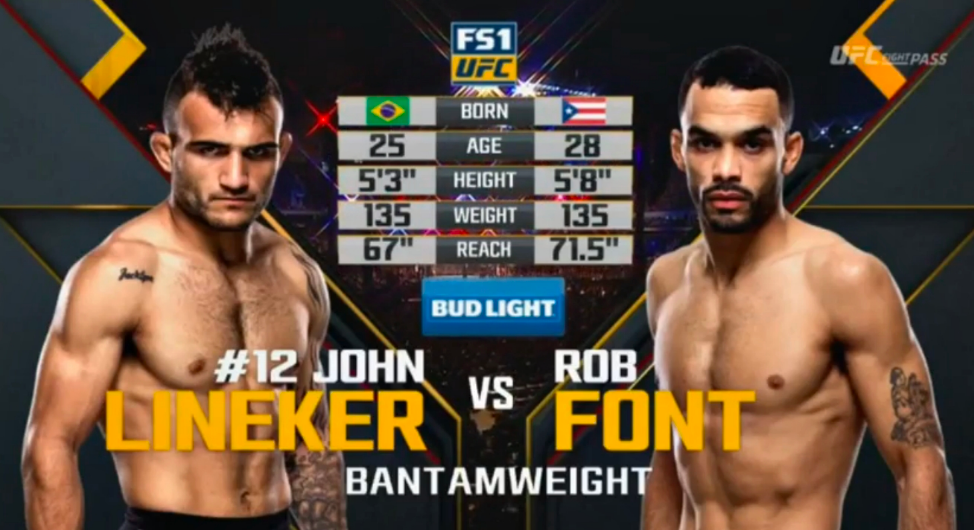 UFC Fight Night 154 is co-headlined by John Lineker vs. Rob Font, this fight will go down Saturday June 22 at the Bon Secours Wellness Arena. This bout will be a rematch from their first encounter at UFC 198 in 2016, where Lineker won by decision.

Betting Insider Journal has already covered the main event here with odds on Jung vs Moicano.

The oddsmakers at BetOnline pit Lineker here as a (-220) favorite, in terms of implied probability that’s 69% average chance of winning.

John “Hands of Stone” Lineker (31-9-0), is back in the octagon after a recent split decision loss to Cory Sandhagen at a UFC Fight Night in April. Prior to that Lineker was on a two win fight streak, a KO win over Brian Kelleher and a decision win to Marlon Vera.

At this stage of his career Lineker is fighting out of necessity for his family, but isn’t getting booked enough to make fighting a #1 priority, with having to work part-time in a Pet Shop in his homeland of Brazil according to MMAJunkie.com.

This fight is a closer call than the oddsmakers suggest, the edge is in Lineker’s favour – however at (+185) Font offers great underdog value to hand Lineker is second loss in a row.